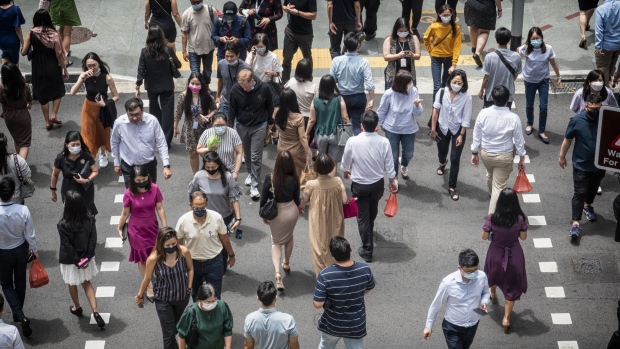 Travelers with baggage at Jewel Changi Airport mall in Singapore, on Wednesday, April 20, 2022. The Monetary Authority of Singapore (MAS), in its policy statement, said it expects the economy to grow “above-trend” for a second year in 2022, with the output gap turning “slightly positive” and GDP fully recovering from the pandemic. , Bloomberg

(Bloomberg) -- Singapore will strive to keep its borders open and stay connected to the rest of world even if a new variant of Covid-19 emerges, Transport Minister S. Iswaran said.

The island city has learned from its past experiences of dealing with Covid variants, Iswaran said Wednesday in an interview with Bloomberg News. When omicron hit, Singapore didn’t backtrack on its reopening plans but rather decided to wait and see how things panned out, he said, noting that response was different versus the delta outbreak.

“We’ve all learned to adapt,” Iswaran said on the sidelines of the Changi Aviation Summit. “We have more tools in the toolkit. It’s not as if you always only have a hammer. Now I’ve got you know, a wrench and a screwdriver and all kinds of other things as well. It really comes down to an assessment of the situation and the risk and then to take a calibrated response.”

Singapore was among the first countries in Asia to reopen its borders, initially allowing entry to fully-vaccinated people from selected countries late last year without quarantine in a bid to help revive the country’s aviation and tourism sectors. Since then, other restrictions have been progressively removed and Changi Airport is now working to keep up with demand.

However while travel is returning, optimism is being tempered by some challenges as companies scale up operations, Iswaran said. The government is helping airlines, airport ground handlers and other firms to hire more people to meet demand.

“This is a challenge of transition,” Iswaran said. “We’re working very hard at the system level and with aviation stakeholders individually and collectively, really pulling together. Our overriding objective is to make sure Changi is well prepared for this transition.”

Passenger traffic at Changi Airport should reach more than 40% of pre-Covid levels this month compared with less than 20% in March.

The government expects that figure to touch 50% by later this year and plans to reopen one of the two terminals closed due to the pandemic. Terminal 2 and 4 were shuttered in June 2020 as travel slumped. Terminals 1 and 3 are open but there are no plans yet on when Terminal 4 will restart.

Iswaran wouldn’t be drawn Wednesday on whether Singapore may meet that 50% target earlier than expectations.

Singapore Airlines Ltd. said earlier this week that it carried 1.45 million passengers in April, the most since the virus outbreak. The airline has restored about 60% of pre-Covid capacity as eased border rules encourage people to travel again.

The carrier reported earnings late Wednesday that disappointed investors, who sent the shares down the most in almost three months Thursday morning. While the welcome revival in travel helped Singapore Air narrow losses in the second half of the fiscal year through March, the high price of oil weighed on operations.

Changi Airport Group has meanwhile announced a “mass hiring” to fill over 6,600 vacancies across a range of jobs, while Singapore has restarted work on the airport’s fifth terminal. Construction of the facility will commence in two to three years in order for it to be ready by the mid-2030s.