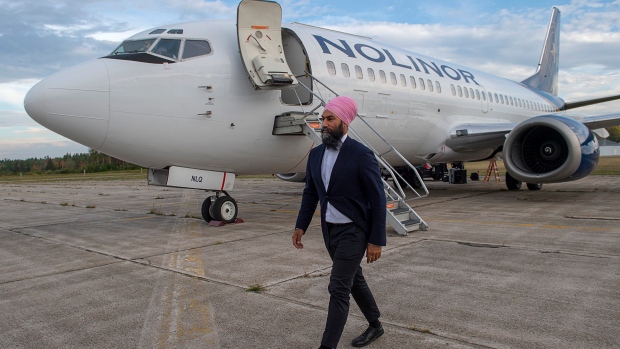 NDP Leader Jagmeet Singh heads from his airplane as he arrives in Miramichi, N.B. on Monday, Sept. 23, 2019. Singh is heading to Bathurst, N.B. for a campaign event before travelling to to Nova Scotia and then Manitoba. , THE CANADIAN PRESS/Andrew Vaughan

CAMPBELL RIVER, B.C. -- NDP Leader Jagmeet Singh says, if elected, he would offer rental subsidies of up to $5,000 each to provide immediate help for families struggling to pay for housing.

Speaking to reporters on British Columbia's Vancouver Island, Singh says a New Democrat government would build half-a-million affordable houses across the country over the next decade.

But he says people need help right now -- and that's why the NDP is also promising to provide a rental subsidy for nearly 500,000 families.

He also argues it's not just a problem in big cities, and that it's a major concern for smaller communities as well.

Singh made the announcement at a construction site in Campbell River, B.C.