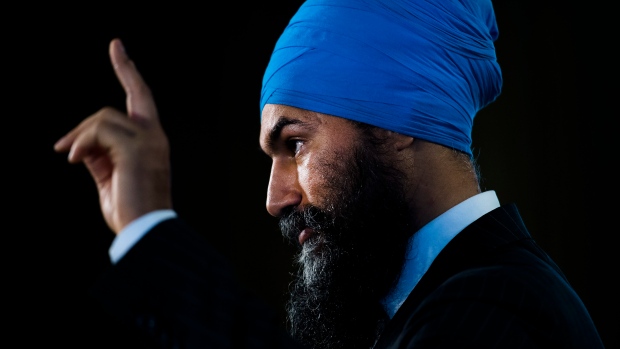 OTTAWA -- NDP Leader Jagmeet Singh says he's prepared to vote against the Liberal throne speech if his party's key priorities are not reflected in some way in the Liberals' policy agenda.

Singh is to meet with Prime Minister Justin Trudeau on Thursday, when he will lay out his priorities in the hopes of using his party's position in a minority Parliament to get policies and laws that reflect New Democrat platform commitments.

Speaking on Parliament Hill Wednesday, Singh said he has three key priorities that he hopes to see in the Liberal throne speech, which will be delivered when Parliament resumes on Dec. 5.

The No. 1 ask from the NDP will be Liberal support for the immediate creation of a national universal pharmacare program.

"That means a timeline, a framework, that means making sure that we've got some clear steps that are going to be indicated in the throne speech," Singh said.

"We know that people are worried about health care. This is something that would unite Canadians across the country."

Singh said he wants to see an "openness" from the Liberals to public dental coverage. He will also push Trudeau to drop the government's legal challenge of a recent Canadian Human Rights Tribunal ruling that ordered Ottawa to pay $40,000 each in compensation to Indigenous children who were wrongly placed in foster care after 2007, as well as to their parents or grandparents.

The New Democratic leader said he's not issuing ultimatums but he did say his party would be willing and ready to vote against the throne speech -- the first confidence vote that Trudeau's minority government will have to pass to hold power -- if it doesn't acknowledge the NDP's requests somehow.

The NDP was reduced to fourth place in the House of Commons behind the Liberals, Conservatives and Bloc Quebecois after winning just 24 seats in the recent election, down from the 39 it held before the Oct. 21 vote.

But despite these losses, party and caucus members were cheering on election night and have since been viewing the upcoming re-opening of Parliament as a positive for the party.

Returning MP Peter Julian points to past minorities that saw the NDP negotiate progressive initiatives, such as universal medicare and the Canada Pension Plan.

"In this case it's not only the politically smart approach to take, to work with us, it's also in the best interests of Canadians."

Trudeau has been meeting with all federal party leaders and with a number of premiers over the last week, getting a laundry list of requests and demands as the other leaders flex their muscles against the weakened Liberals. The opposition leaders want spending or policy commitments from Trudeau in exchange for support to keep his minority government afloat.

Trudeau has shunned a formal coalition with any of the other parties, but has indicated willingness to work with parties on a case-by-case basis.

When it comes to Singh's top request, the Liberal platform did promise a $6-billion increase to provincial health transfers over the next five years to help pay for improvements including pharmacare. Singh has said this would not go far enough, despite criticism from the Liberals that Singh's demands are unrealistic.

The advisory panel on pharmacare established by the Liberals during the last Parliament estimated full-scale pharmacare would cost at least $15 billion a year. Singh's platform estimated the price at $11 billion by 2023-24.

When it comes to dental care, Singh appears to be offering the Liberals more leeway. During the campaign, the NDP leader's daily speeches included heavy emphasis on his promise to extend full public dental coverage to households making less than $70,000 a year.

On Wednesday, he said he will be looking for "openness" from the Liberals to help Canadians struggling with dental-care costs.

Conversely, the NDP leader was specific in calling for the government to drop its appeal in the child-welfare case. That may prove to be a harder sell to Trudeau, who has said he believes compensation is warranted but that the time frame given by the Canadian Human Rights Tribunal was too tight. The tribunal issued its compensation order Sept. 6, with a deadline of Dec. 10 for submissions on how to handle the multibillion-dollar compensation award. Much of the time in between has been taken up with the 40-day election campaign.

Julian said he sees many similarities in Trudeau's approach to the one taken by Paul Martin when his Liberal government was reduced to a minority in 2004. At that time, Martin initially tried to govern as though he had a majority, Julian said, but eventually had to walk back a proposed suite of corporate tax cuts and instead work with then-NDP leader Jack Layton to increase spending on post-secondary education, transit and housing.

Julian said the NDP is a particularly well-positioned to work with the Liberals now because of their shared progressive ideologies. He noted the Conservatives and Bloc Quebecois have "very right-leaning priorities" and that even if Trudeau might not want to play ball with the NDP just yet, this could very well shift.

"I think with minority governments they sometimes, particularly when they've had a majority government before, don't necessarily understand that the dynamic has changed, and I see that as posturing," Julian said.

"But I know that Jagmeet will be putting forward the priorities that he very clearly put out during the election campaign. Ultimately, we're just going to keep pushing and working hard, the way we do, and ultimately I think the reality of a minority government is something that will be very clear to Mr. Trudeau and to the Liberal government."