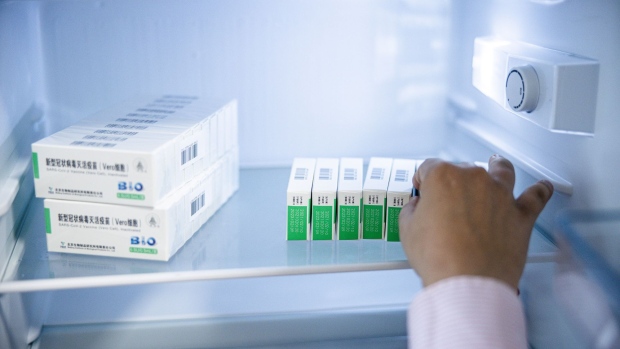 A medical worker removes a box of the Sinopharm Group Co. Covid-19 vaccine from a refrigerator at a clinic in Budapest, Hungary, on Thursday, April 1, 2021. Hungarian Prime Minister Viktor Orban vowed to ease virus curbs soon even as his nation has the world’s highest Covid-19 death rate and reported a big jump in fatalities. , Bloomberg

(Bloomberg) -- The Chinese-made Sinopharm vaccine has failed to produce sufficient antibodies in a quarter of elderly people who were voluntarily tested in Budapest, according to a study by the opposition-led Budapest City Hall.

The results were published just as Hungarian Prime Minister Viktor Orban’s government, which has faced opposition criticism for having widely adminsitered Sinopharm shots to older people, started offering third shots this week for anyone who requests them.

Hungary, which has had the highest level of Covid-19 deaths per capita after Peru, was the only European Union country to have deployed the Sinopharm vaccine to combat Covid-19.

The non-representative study tested 13,524 people who were at least 60 years old. More than half had been inoculated with Sinopharm.

The results showed that 25.9% of those people didn’t have the minimum antibody level of 50 AU per milliliter, compared with 3.2% for those who received Russia’s Sputnik V, 1.6% for Pfizer-BioNtech and 1.1% for Moderna.

Sinopharm’s ability to generate antibodies got progressively worse with age, with vaccinated people who didn’t have the minimum antibody level rising to 34.5% among those aged 80 and over, the results showed.

Orban’s government cited the initial slow pace of procuring Pfizer’s and Moderna’s vaccines for buying the shots from China and Russia. The country has also used the AstraZeneca and Janssen vaccines.