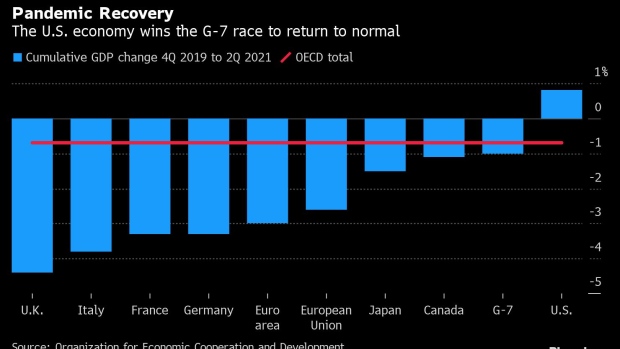 Britain’s economic difficulties are multiplying, threating to erase the euphoria that accompanied the end of coronavirus lockdowns and leave policy makers with a delicate balancing act.

Households are facing painful price increases as a growing energy crisis collides with labor and goods shortages caused by Brexit and the pandemic. That’s putting the pinch on family budgets at the moment the Treasury is scaling back support put in place to help those out of work during the crisis.

Those trends have already brought the recovery to a near halt and complicate calculations for Bank of England Governor Andrew Bailey about when to rein in stimulus. It also raises difficulties for Chancellor of the Exchequer Rishi Sunak, who has presided over an economy lagging the rest of the Group of Seven nations.

“We are seeing more vulnerabilities emerge within the recovery,” said Yael Selfin, chief economist for KPMG U.K. “We have supply chain issues. We could also see higher unemployment in the short term.”

Inflation is rising further above target

Consumer prices surged 3.2% in August, far enough over the BOE’s 2% target that Governor Andrew Bailey will have to write a letter to Chancellor of the Exchequer Rishi Sunak explaining the divergence.

The central bank expects inflation to hit 4% by the end of the year, then fall back toward the target. Consumers in a recent survey said they’re anticipating an upward drift in inflation, a perception the BOE must check to prevent higher prices feeding into wage demands.

“They really need to work out whether some of the upside risks to medium-term inflation -- because of what we’re seeing now -- will be counteracted by some of the downside risks,” said George Buckley, chief U.K. and euro area economist at Nomura.

Britain’s economic recovery stumbled in July, with the weakest performance since the height of lockdown at the start of the year.

Those issues make it unlikely the economy will achieve the near 3% growth in the third quarter the BOE expects. Slower growth would curb tax revenues to the Treasury and reduce the pace that companies are able to absorb workers still off the job.

“The MPC will be able to cite the recent growth wobble as a justification to continue” with asset purchases, Allan Monks, an economist at JPMorgan Chase & Co., wrote in a note.

The Treasury next week is closing the furlough program, which paid 80% of the wages to employees whose workplaces were closed during lockdowns. That will leave 1.6 million people still receiving the benefit at risk of joining the ranks of the unemployed.

At the same moment, the Treasury is ending a 20 pound-a-week ($27.30) temporary increase in universal credit welfare payments -- a sum that makes up about 20% of income for another 1.6 million people, according to the Institute for Fiscal Studies. Starting in April, Sunak will raise taxes to the highest level on record to fund health and social care.

Together, those measures move the fiscal stance from boosting the economy toward cooling it at a time when workers across a variety of sectors are struggling to find a job.

“Key to the eventual timing of the first hike will be how the labor market responds to the end of the furlough scheme this month. If the BOE’s forecasts are borne out and the unemployment rate remains broadly steady then market expectations for a rate rise in the first half of 2022 will likely prove correct. It may even come as early as February, if the pool of furloughed workers fail to alleviate demand and supply mismatches and upward pressure on wage growth persist.”

Europe’s natural gas market is heading into the peak winter demand season short of supplies. A fire knocked out a key path to electricity imports from France. The result is that the wholesale price of electricity more than doubled in the past three months, increasing the cost of home heating and fuel industry needs.

Steel and fertilizer produces that are most sensitive to energy prices warn they may have to curtail production. Utilities are boosting the cost consumers pay, which will add to inflation starting in October and again in April when the regulator Ofgem reviews tariffs.

“For the Bank of England, a third consecutive spike in the Ofgem price cap could prove harder to digest,” Sanjay Raja, an economist at Deutsche Bank, wrote in a note. “On the one hand, growth slowed down markedly. On the other hand, the overwhelming public narrative on inflation is turning more hawkish.”

The public finances are strained

Higher inflation is complicating Sunak’s effort to plug a hole in the public finances. Debt interest cost the Treasury almost 19 billion pounds ($26 billion) in the latest three months because so many of the bonds the government sells are tied to the retail prices index.

RPI inflation is forecast to average 4.3% in the fiscal year that ends in March, according to the latest Bloomberg survey of economists. That potentially adds around 8 billion pounds to government spending.

Workers are in short supply

The pandemic and Brexit dried up the pool of labor companies need to grow. Britain raised barriers to immigration after leaving the European Union, making it more difficult for millions of people to remain in the country. At the same time, millions more in hospitality, transport and tourism jobs hit hardest by lockdown looked for more secure work.

The result is a smaller population of workers and upward pressure on wages. Business groups are asking the government for looser immigration rules so they can hire essential workers in fields such as trucking and health. Ministers say companies should pay more for training for those who remain unemployed or on furlough.