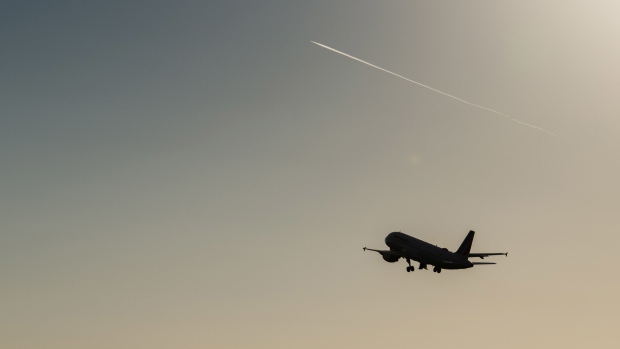 A passenger aircraft takes off from Paris Charles de Gaulle airport in Paris, France, on Friday, Oct. 29, 2021. Air France-KLM expects a return to profitability for the full year and is adding transatlantic seats as an easing of travel rules revives prospects for the struggling carrier. Photographer: Nathan Laine/Bloomberg , Bloomberg

“We are concerned about the Federal Aviation Administration’s (FAA) recent efforts to revisit the FCC’s 2020 decision” to free airwaves for the fast 5G mobile service that’s to start next month, the six said in a letter dated Monday obtained by Bloomberg News.

“The FAA position threatens to derail the reasoned conclusions reached by the FCC after years of technical analysis and study,” the signers, a mix of Republicans and Democrats, said in the letter. They are Ajit Pai, Tom Wheeler, Mignon Clyburn, Julius Genachowski, Michael Copps and Michael Powell.

At issue is whether the 5G signals will interfere with radio altimeters that calculate altitude and help with landings. The telecommunications companies and FCC say precautions already in place ensure that won’t happen, and airlines and the FAA say more needs to be done to ensure safety.

The FAA said in an emailed statement that it has spelled out its concerns in the twin orders and “we continue to work with federal agencies and the wireless companies.”

The aviation agency has long maintained that evidence from testing has shown that aircraft may be subject to interference and it may have to take action to limit flights to preserve safety.

The six former FCC chiefs said agencies should work together.

Their letter was addressed to FCC Chairwoman Jessica Rosenworcel and to Evelyn Remaley, acting administrator of the National Telecommunications and Information Administration, a branch of the Commerce Department that plays a role in airwaves regulation.

The dispute represents a hitch in mobile providers’ pursuit of 5G airwaves to serve billions of connected homes, factories and gadgets with the latest generation of technology. AT&T and Verizon are in a race to catch up with T-Mobile US Inc., which is about a year ahead on 5G network deployment using other airwaves not suspected of causing interference.