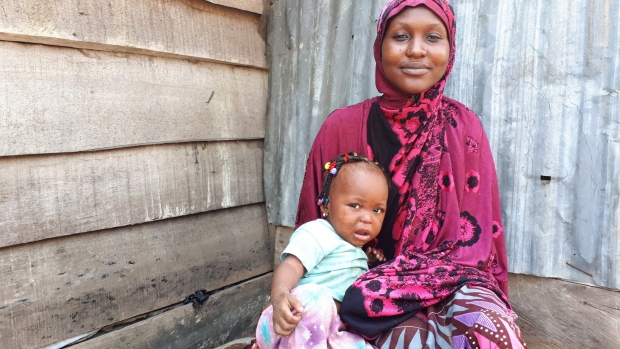 A man lies on a bench in the Ikeja Under Bridge area of Lagos. Photographer: Emele Onu/Bloomberg , Emele Onu, Pauline Bax, Mustapha Adamu and Yinka Ibukun

(Bloomberg) -- “I eat anything I see,” says Abdul Edosa, 30, as he sits under the bridge in the sprawling Nigerian commercial metropolis of Lagos, where he sleeps. “I beg money from people -- anything they give me, I eat.”

Edosa’s is a familiar voice in the country with the world’s largest number of extremely poor, which the United Nations defines as living on less than $1.90 a day. The estimated figure now is 87 million people, or almost half the population of Africa’s biggest oil producer, and unless something dramatic happens, it’s going to get much bigger.

While poverty in India is declining, the number of destitute in Nigeria is believed to be growing by six people every minute, according to a recent paper from The Brookings Institution. The UN expects its population to double to 410 million by 2050, potentially swelling the ranks of the poor.

Edosa usually passes his nights with a handful of men and women on makeshift wooden beds under the bridge in Ikeja, the capital of Lagos state. Police trying to chase them away are a constant menace. A high-school dropout who did a stint as a television-repair apprentice, he now heads off each morning to look for odd jobs at building sites or hits the streets to beg.

He won’t be casting a ballot in the elections scheduled for Saturday, when President Muhammadu Buhari hopes to win re-election against multi-millionaire Atiku Abubakar, and never registered to vote.

“I never see food chop na to go vote for person I go do,” he says in pidgin English, meaning, “I haven’t seen food to eat, is voting going to be my priority?”

Poverty started to deepen in Nigeria at the time of the 1970s oil-price boom that propelled it into the ranks of Africa’s wealthiest countries. As the elite grew richer through patronage networks in the petroleum industry, successive military and civilian governments neglected agriculture, manufacturing and education. A study prepared for the U.K. Department for International Development showed real annual per-capita income fell from $264 to $250 between 1970 and 1999 despite an estimated $230 billion in oil revenue.

“As soon as Nigeria discovered oil, its society and structure of governance has never been optimized to produce good leadership,” said Michael Famoroti, an economist and partner at Stears, a Lagos-based research and analytics firm. “The discovery of oil during the military era essentially made Nigerian leadership lazy. And we are still suffering from that legacy.”

Today, Nigeria ranks 157 out of 189 countries in the UN Human Development Index, which measures indicators such as health and inequality. Life expectancy is still only 54 years, although that’s an improvement from 46 years in 1999. About 80 percent of people who earn an income are active in the informal sector or have what the UN calls “vulnerable employment,” work that lacks social security or guarantees any kind of rights.

Since assuming office in what marked the first democratic transition of power from one political party to another in 2015, Buhari has made some effort to raise living standards.

His government created a Household-Uplifting Program that hands destitute people 5,000 naira ($14) a month. At the same time, he’s been criticized for an exchange-rate policy that reduced the value of Nigeria’s currency and drove food prices up nationwide.

“Buhari came in with good intentions, but his initial economic policies worsened the problems he found on the ground,” said Nigerian economist Zuhumnan Dapel.

That, and the relatively small number of people -- less than 1 million -- that benefits from the program, means that relief is still a long way off for most.

Alkassim Ibrahim, a 45-year-old homeless man in the northern city of Kano, isn’t covered in the program. He worked as a motorcycle-taxi driver until he had his leg amputated after a road accident 10 years ago and today his only possessions are his crutches, a thin blanket and a bag of clothes he uses as a pillow.

Forced to leave school after the death of his father, Ibrahim turned to menial jobs when he was still a boy. Now, he survives by begging.

“Due to my health challenge, being a cripple, I don’t have any means of earning a living but to depend on members of the public,” Ibrahim said as he sat on the tiled floor of a shop where he is sometimes allowed to sleep. “I can’t tell how many times I pass the night without eating food. I want to see me get married, settle in my own house with my children playing with me, but only God can offer that to me.”

Between 72 and 91 percent of Nigeria’s poor are at risk of never improving their living standards significantly, according to Dapel.

That’s the situation Fatima Ali, 23, finds herself in. She’s stuck in a partly demolished slum outside the Aboki Estate in Lagos, making $1.40 a day selling roasted peanuts in front of the corrugated-iron shack she calls home.

In the evening, she spends a fifth of her income on a jerrycan of fresh water to bathe her two young children. Breakfast consists of bread and tea; she rarely eats more than twice a day.

“I feel bad because some countries, even if they don’t have money, they use it to help their poor people,” Ali said as her baby girl played on her lap. “Here, they don’t join their heads together to help poor people. That’s Nigerian life.”

To contact the editors responsible for this story: Sophie Mongalvy at smongalvy@bloomberg.net, Karl Maier, Paul Richardson