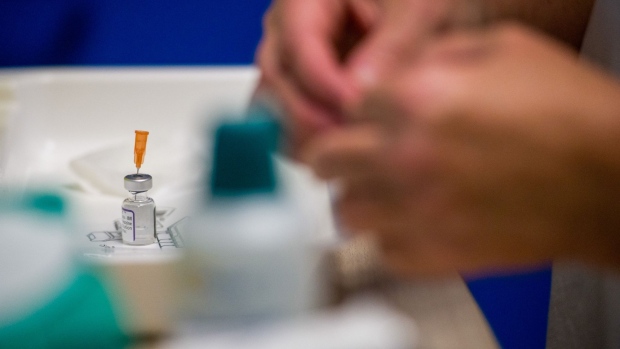 A healthcare worker prepares a third dose of the Pfizer-BioNTech Covid-19 vaccine at a senior-living facility in Paris, France, on Thursday, Sept. 16, 2021. France is on the forefront of a carrot-and-stick approach that seeks to maintain a high level of vaccinations. Photographer: Nathan Laine/Bloomberg , Bloomberg

The results, published Thursday, tested the vaccines in more than 2,800 volunteers 30 and older who had already received two doses of the AstraZeneca Plc or Pfizer shots. All seven vaccines boosted immunity after the Astra vaccine, compared with a placebo, while six raised antibody levels after Pfizer, the study found.

Still, there were large variations between the antibody and cellular immune responses of the different vaccines, with the biggest boosts seen from the messenger-RNA vaccines from Pfizer and Moderna. Antibody levels were measured four weeks after the booster was given.

It’s unclear how many doses of the vaccines will be needed to provide the longest-lasting protection, or whether yearly Covid shots will be required, but the level of antibodies induced by a number of the vaccines wanes after a few months, pushing the case for boosters. With the new omicron variant spreading, countries are looking to protect their populations as quickly as they can.

The Valneva SE vaccine, which performed well in trials but hasn’t yet been authorized for use, was the only shot that didn’t increase antibody levels after two doses of Pfizer compared with a placebo, though the vaccine was only tested in about 100 people. The study found all seven shots were safe to use as third doses.

The other vaccines tested were from Johnson & Johnson, CureVac NV and Novavax Inc. The shots were given 10 to 12 weeks after a second dose of either the Astra or Pfizer vaccines.

Early results from the study were used to inform Britain’s initial booster program in September, which was focused on older people and relied on the Pfizer and Moderna shots as third doses. The U.K. expanded the rollout of boosters to all adults this week in light of the new omicron variant, and cut the time from six months after a second dose to three.

“These data are directly relevant to the decision-making this week,” Saul Faust, a professor of pediatric immunology and infectious diseases, and the lead investigator on the study, said at a press briefing. If a “country or region of the world only has one of the vaccines that we’ve shown that boost then that will be fine to use as a booster and safe to do it. It’s not all about mRNA.”

Most of the vaccines also produced good T-cell responses, another arm of a person’s immune defense, though the effect of Valneva as a booster was less strong.

Three of the vaccines haven’t yet been authorized in the U.K. or European Union. CureVac abandoned its first-generation vaccine in October after disappointing trial results. Novavax is expected to receive clearance in Europe in the coming weeks, while Valneva should get the green light from the U.K. and EU early next year.