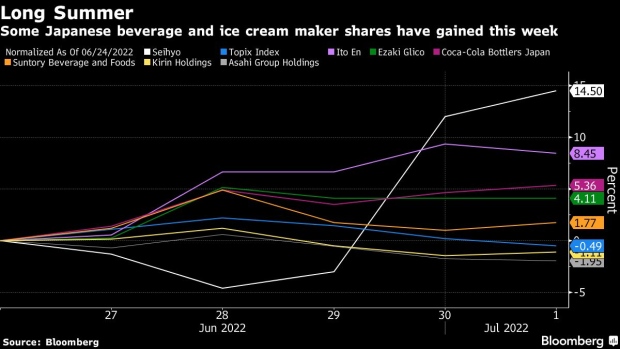 (Bloomberg) -- It’s an unseasonably hot summer in Japan, and that’s good news for shares of cold beverage and candy makers.

The heat is boosting consumption in Japan, with the Topix Foods Index headed for a third week of gains even as the broader gauge declines. An early end to the rainy season has historically tended to boost the Nikkei Index’s performance, according to Daiwa Securities Co.

“An early end to the rainy season means a longer summer, and that should stimulate demand for air-conditioners, summer clothings and other seasonal goods,” said Eiji Kinouchi, chief technical analyst at Daiwa Securities. “I expect positive impact for the next three months or so from improved business sentiment.”

However, so far, there’s been a limited impact from the hot weather on some of the potential beneficiaries. That may be because companies such as air-conditioner maker Daikin Industries Ltd. and brewer Asahi Group Holdings Ltd. earn a large chunk of their revenue outside of Japan.

Some economists also note that if temperatures keep rising, consumption may actually decline as consumers opt to stay home instead.

“People say if the temperature rises above 30 degrees, the consumption of ice cream actually falls because people thirst more for stuff like sparkling water and shaved ice,” said Yusuke Maeyama, a researcher at NLI Research Institute. “It’s not all that simple. I’m now staying at home myself because it’s too hot. So it’s hard to talk about consumption trends.”