BRP Inc., the Canadian maker of Sea-Doos, three-wheelers and other gasoline-fueled outdoor toys, is eyeing a new type of customer: the climate-conscious urban dweller.

The power-sports vehicle manufacturer unveiled six electric prototypes at a September event for dealers in Las Vegas, giving them a taste of the future as it explores ways to enter a segment that’s still in its infancy. Among them were two models of two-wheelers that could catapult BRP into the urban mobility market.

While the two-wheeler field of mopeds and scooters is competitive, BRP Chief Executive Officer Jose Boisjoli finds inspiration in Tesla Inc., which he says “taught a lesson in business to a lot of people.”

“Tesla didn’t exist, they came into the very competitive market that’s the car industry, with a very different product,” Boisjoli said in an interview in Montreal Wednesday. “Could BRP one day be into electric two-wheelers and become the Tesla of the two-wheeler world? Maybe.”

There are about 900 million oil-burning two- and three-wheeled vehicles on the road around the world, the vast majority of them in Asia, according to research by BloombergNEF. Sales of electric models are picking up in countries like India, where they accounted for 46% of three-wheelers sold last year.

In most of the West however, the concept of e-mopeds has yet to be widely introduced, according to BloombergNEF analyst Andrew Grant. That’s starting to happen through sharing programs like Revel, which rents them by the minute in three U.S. cities, while stand-up scooter company Bird Rides Inc. has also announced plans to join in, he said.

BRP would need demand for more than 10,000 units per year in the medium term “to sustain a decent business model,” according to estimates by Benoit Poirier, an analyst with Desjardins.

“These products tend to be well suited for urban transportation, which is a key consideration for millennials,” he wrote in a September note. “Key ingredients of commercial success will be finding the right balance of production volume, price point and range while also making sure that there is a profitable business case.”

So far, demand for BRP’s carbon dioxide-emitting recreational vehicles, which sell under brands like Ski-Doo or Can-Am, show no sign of a slowdown.

Last week the company raised its full-year profit and revenue forecast, a month after presenting a five-year plan that targets annual earnings-per-share growth of 15%. Shares have climbed 84% this year, helped by a new trade agreement among Canada, the U.S. and Mexico, three countries where the company has factories. 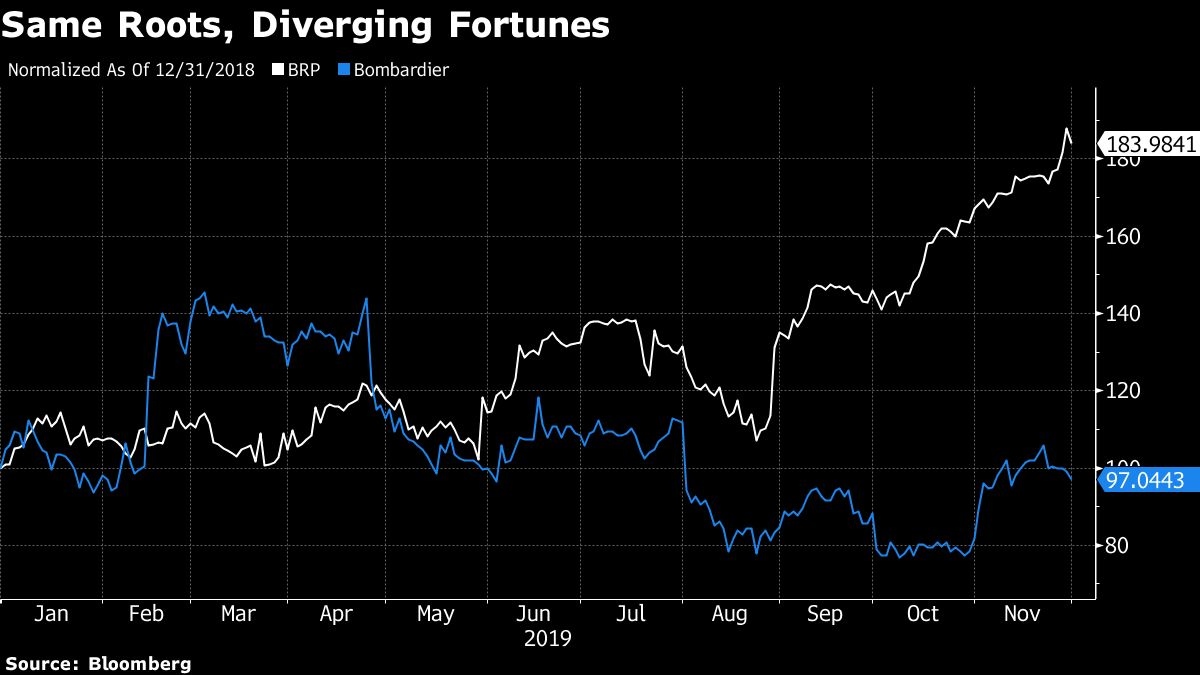 Dealers, for their part, seem in no hurry to make the e-switch, according to BMO Capital Markets analyst Gerrick Johnson, who attended BRP’s September presentation. The electric “concepts,” an aside to the presentation of 2020 models, also included two city-focused three-wheelers, a Sea-Doo and a recreational three-wheeler known as Ryker.

“We think we heard a collective groan from the crowd when it heard the word “electric,“ he wrote in a note to investors that month. “But the understanding that these are just concept vehicles, and not products dealers will need to take now, made the news much more palatable.”

Europe-based investors whom Boisjoli met the week after the presentation took a more immediate interest.

“They all talked to me about electric,” he said. “They wanted to know if we’re working on it and if we’re going to be ready when demand is here--and the answer is ‘yes’.”

BRP was publicly listed in 2013, a decade after former parent Bombardier Inc. sold its recreational-products business to investors including Bain Capital, Caisse de Depot et Placement du Quebec and members of the Bombardier and Beaudoin families. Bain’s stake has decreased over time but was still around 22% as of April 17, according to a company filing.

The company is based in Valcourt, the Quebec town where Joseph-Armand Bombardier started building snowmobiles in the 1930s. BRP has rallied so much its market value now exceeds its former parent Bombardier.

While BRP declined to disclose any time frame for its future electric fleet, the competitive pressure went up a notch last month -- from none other than Tesla.

During the awkward debut of its Cybertruck on Nov. 21, the company that inspired Boisjoli introduced a surprise addition to the pickup: an all-terrain vehicle that drove into the bed of the truck and right onto BRP’s home turf.