Skyharbour Resources has positioned itself to capitalize on the bullish uranium market - BNN Bloomberg
{{ currentBoardShortName }}
Markets
As of: {{timeStamp.date}}
{{timeStamp.time}} 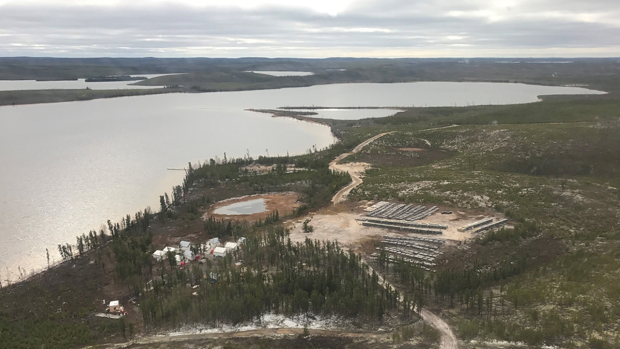 Mention “Saskatchewan” and most people immediately think of wheat fields and flat prairie landscapes rather than substantial mineral deposits, like uranium, waiting to be discovered.

However, savvy investors know that Canada is “one of the world's largest uranium producers” and that all “operating uranium mines and mills in Canada are located in northern Saskatchewan.”

The Athabasca Basin hosts the richest uranium deposits in the world. In fact, the basin hosts the world's most significant uranium mines and has historically produced almost 20 per cent of annual global uranium production, all within a safe and favourable mining jurisdiction. It is the highest-grade depository of uranium, hosting deposits 10 to 100 times the global average.

“Saskatchewan is ranked the number three mining jurisdiction in the world by the Fraser Institute and it’s consistently ranked in the top five. So, you can check that box in terms of just where you want to be working, where you want to be exploring, developing and mining.” — Jordan Trimble, president & CEO, Skyharbour Resources Ltd.

With the uranium market picking up steam and the U₃O₈ spot price moving above $30/lbs for the first time in 2021, the basin is the best place globally to be for Skyharbour Resources (TSXV: SYH | OTCQB: SYHBF | Frankfurt: SC1P).

A uranium market rally is driving momentum for Skyharbour

The company has made big moves in the last eight years. Under the management of president and CEO, Jordan Trimble and 40-year veteran head geologist, Richard Kusmirski, they set up shop in Athabasca Basin.

“Saskatchewan is ranked the number three mining jurisdiction in the world by the Fraser Institute and it’s consistently ranked in the top five,” says Trimble. “So, you can check that box in terms of just where you want to be working, where you want to be exploring, developing and mining.”

Traditional exploration in the area led to several uranium discoveries in the 80s, 90s and 2000s, but new exploration methods, techniques and geological models are rapidly advancing the basin’s reputation for being a world-class uranium exploration and mining district.

New geological models and looking for deposits in different geological settings has also changed the landscape in the basin. Notably, more companies, including Skyharbour, have been exploring for uranium deposits in the basement rocks below the Athabasca sandstone which has yielded major discoveries more recently.

“These new exploratory techniques and target types are a significant part of our exploration strategy. We're using these cutting edge, modern techniques to hone in on discoveries and looking for new zones of mineralization in undertested targets,” notes Trimble.

Furthermore, the value of these deposits is getting a potential boost with new proposed mining methods like Surface Access Borehole Resource Extraction (SABRE) and in-situ recovery (ISR) which can offer a lesser environmental impact, shortened timelines to production and lower extraction costs.

Skyharbour is putting these new exploratory techniques and strategies to use at their flagship project, Moore Lake. They have acquired a 100 per cent interest in the project from Denison Mines, a strategic shareholder of Skyharbour. Denison’s CEO, David Cates, is also on Skyharbour’s board of directors.

The Moore Lake project hosts high-grade uranium mineralization at the Main Maverick Zone, which was discovered by JNR Resources in the early 2000s. It has also been the subject of historic uranium exploration, with over $40 million spent on drilling over 140,000 m in 380+ drill holes.

Skyharbour sees a chance to utilize some of the new techniques to explore the project even further.

“One of the new strategies with exploration in the Athabasca Basin is targeting zones at depth underneath the sandstone and unconformity and looking for the basement-hosted feeder zones which can contain some of the highest-grade and most concentrated zones of uranium,” explains Trimble, who adds that 20 years ago, the technology and exploratory tools used to target these deposits in the underlying basement rocks was much more limited.

It has been a successful approach. In the last year, Skyharbour hit the Moore Lake project hard with drill programs focused on these basement rock targets. The company recently reported the longest zone of continuous uranium mineralization discovered at Moore, which Trimble says is just the beginning.

The company has also announced that it had begun its 2021 geophysical and diamond drilling programs at Moore Lake, where they are looking to expand on the recent exploration success and add to the high-grade mineralization previously discovered at the project. These ongoing exploration and drilling programs will provide ample news flow and catalysts for the company and its shareholders for the remainder of the year.

To further their exploration objectives, three years ago, Skyharbour started partnering with other uranium companies to help advance projects in their vast landholdings in the Athabasca Basin, taking on a prospect generator model to complement the discovery story at Moore Lake.

This is how names like industry-leader, Orano Canada, Azincourt Energy and, more recently, ASX listed Valor Resources, got involved at projects like the Preston, East Preston (both strategically located near Fission’s Triple R deposit and NexGen’s Arrow deposit) and Hook Lake, respectively. Skyharbour’s partner companies have spent millions in combined exploration efforts to advance these projects and have made cash and share payments to Skyharbour as they earn majority interests in the assets.

“It makes sense for us to find partner companies to come in and advance these projects. We only have so much time, money and resources on our side, and this allows us to leverage the prospect generator model to create shareholder value,” says Trimble.

Transactions and partnerships like those at Preston and East Preston are usually structured initially as a 51 per cent to 70 per cent earn-in option ultimately forming a joint venture partnership. The partner company funds all the work for a given period and once the earn-in period is over and the company has met the requirements of the earn-in including cash and stock payments, the JV partners continue to advance the project with Skyharbour retaining a minority interest and upside on future success.

“The model is to go out and incubate these properties and then bring in a strategic partner to come in and earn-in on the project,” Trimble explains.

Skyharbour recently formed a joint venture with Orano, France’s largest uranium mining and nuclear fuel cycle company, at the Preston project. The joint venture was created after Orano completed $4.8 million in staged exploration expenditures and made cash payments to Skyharbour to earn-in 51 per cent at the project.

Skyharbour’s other partner company Azincourt also recently completed their 70 per cent earn-in at the East Preston project by completing $2.5 million in exploration expenditures and making cash and share payments to Skyharbour.

Finally, Skyharbour’s newest partner company, Valor, can earn-in 80 per cent of the Hook Lake project by spending $3.5 million in exploration and making $475,000 in cash payments over a three-year period. Skyharbour was also issued 233,333,333 shares of Valor upfront.

Skyharbour’s prospect generator strategy has worked so far. Partnering up with geological and management teams made up of some of the best in the industry and backed by shareholders like Denison Mines, it is no surprise that the company’s business model is succeeding.

The right people and the right timing

The future for Skyharbour and the rest of the uranium mining industry is looking bright. After almost a decade of volatility in the market, the world’s growing need for carbon free electricity is helping uranium company values steadily climb. Analysts are also predicting a rally in prices from now until 2024 at the $50/lb level.

Trimble notes that a part of this plan includes nuclear energy, which is fueled by uranium.

All of these factors are lining up to propel Skyharbour’s efforts forward in the Athabasca Basin.

The company’s team is hopeful that their work will time perfectly with a turnaround in the uranium market. Geologists like Richard Kusmirski, Christine McKechnie, and Dave Billard have focused their careers in the Athabasca Basin and, according to Trimble, are key to Skyharbour’s success.

“Couple our focused geological expertise with management and a board of directors that has managerial and capital markets experience like myself, Jim Pettit, Joe Gallucci, and Dave Cates, and it’s a perfect mix of skillsets needed to make the company a success.”

Skyharbour will continue to work on its own and in partnerships with other companies to crystalize shareholder value and tap into the robust discovery potential at the current projects while always keeping a watchful eye on other assets that can be acquired at attractive valuations.

To learn more about Skyharbour Resources, visit their website here.