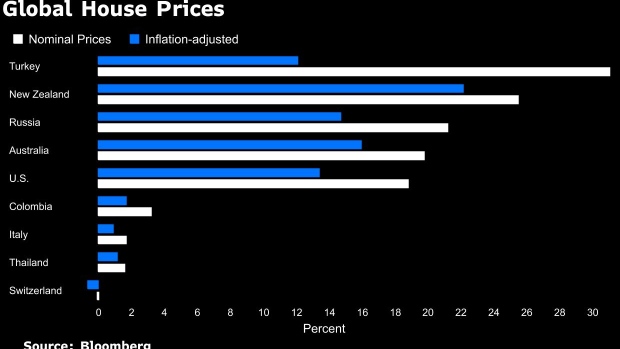 (Bloomberg) -- The surging cost of student accommodation in Turkey is the latest post-lockdown headache for President Recep Tayyip Erdogan, who’s facing growing criticism after an Istanbul park was turned into a protest camp last week.

Students are using the hashtag #barinamiyoruz, or “we’re unable to shelter,” to show their anger on social media. Nearly 800 state-run hostels accommodate about 720,000 of 8 million university scholars, but for many of the rest rentals have jumped this year as those who moved home during the pandemic look for housing.

Fethi Acikel, deputy chairman of the opposition Republican People’s Party, accused the government of depriving “millions of students and their families of the basic right to housing” by failing to build enough new residences. “The cost of private hostels or rental houses have doubled or tripled,” he said.

Erdogan’s administration, which lost support as Covid restrictions slowed the economy, expanded credit to restore growth last year. But the policy helped propel a slump in the lira -- it lost a fifth of its value in 2020 and 16% this year, the worst-performer among emerging markets -- which is being felt across the property market.

The rental market has surged at a faster pace. Asking prices for new contracts rose an annual 35% in August nationwide, and more than 50% in Istanbul, Turkey’s largest city, according to data jointly published by Bahcesehir University’s Betam research center and real-estate website Sahibinden.com.