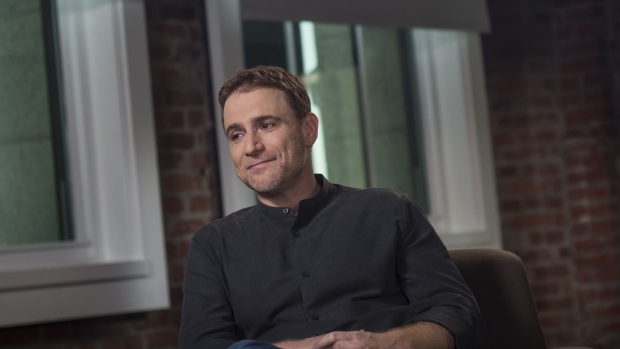 Stewart Butterfield n Friday, Aug. 3, 2018. Slack is a platform aimed at teams of co-workers to converse, work on projects together and share links, photographs and more in real time. , Bloomberg

The fortune of Slack’s billionaire co-founder and chief executive officer increased about US$400 million from reports this week that Salesforce is considering taking over the workplace chat tool.

Slack shares were down 3.2 per cent to US$39.39 at 9:38 a.m. Friday after surging 38 per cent on Wednesday, the most since the first day of trading last year following a direct listing onto the New York Stock Exchange. Butterfield’s stake in Slack is worth about US$1.6 billion, according to the Bloomberg Billionaires Index.

If a deal happens, it wouldn’t be the first business Butterfield has sold. The 47-year-old offloaded photo and video hosting service Flickr to Yahoo! Inc. in 2005. He worked at Yahoo until 2008 and later founded the company that became Slack, an acronym for “Searchable Log of All Conversation and Knowledge.”

The Canadian entrepreneur, who studied philosophy in college, has come a long way from the log cabin in British Columbia where he lived without electricity and running water for the first few years of his life.

“My father’s from New York and my mother’s from Montreal, and they really had no idea what they were doing when they tried to live off the land,” Butterfield said in 2018. “It was pretty easy to grow a big zucchini, but you cannot live off zucchini alone. When I was about five, we moved to the city.”