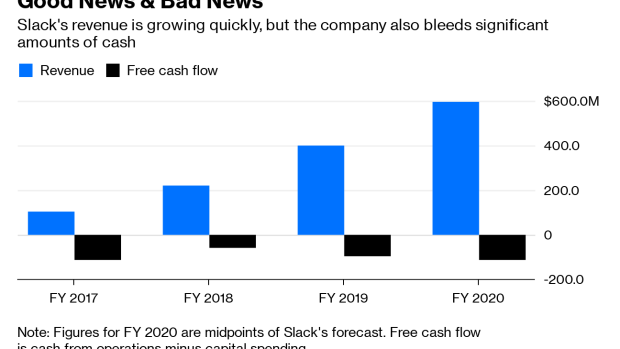 (Bloomberg Opinion) -- As Slack Technologies Inc. flips a switch later Thursday and becomes a public company, it’s another sign of how far the world has progressed beyond the old times of corporate technology. What’s different now is that it actually matters what you want.

Until the last decade or so, the technology that workers used in office jobs was largely chosen by bosses far above them. The computer at the desk, the email system, the software that workers used to keep track of expenses or crunch a business unit’s finances were all imposed on them. And it was frequently terrible, because ease of use wasn’t necessarily an important quality to sell software.

Cubicle jockeys have a lot more say in what tech they use at work these days. Relatively young software from the likes of Slack, Box Inc., Zoom Video Communications Inc., Google’s G Suite and SurveyMonkey parent SVMK Inc. have free or inexpensive versions for people to try by themselves. The idea is that a few workers will test it out unofficially and like it enough to persuade their employers to pay for the tech because it helps them do their jobs more effectively. And many companies are listening.

This “bottom-up” business strategy has become a standard approach for cloud software aimed at businesses. Similar tactics were key for Amazon Web Services and other services used by technical specialists inside companies, and that has spread to more departments.

Slack is perhaps the apotheosis of the bottom-up boom. Video conferencing or spreadsheet software can be useful even if one person at a company uses it. But team communication software like Slack is truly only handy if a critical mass of people are using it. That’s why Slack needs to win over workers and then persuade their bosses to pay for versions that are tuned to a corporation’s security and data-compliance needs. (Bloomberg Beta, the venture capital arm of Bloomberg LP, is an investor in Slack.)

Some things in corporate IT don’t change, though. Young cloud software companies like Slack still court systems-integration firms that customize technology for corporations and other large organizations. The bottom-up crew also builds sales teams to pitch software at big companies, and those salespeople still get expensive cars when they sign up big customers.

And like the Oracle and Microsoft of old, young companies still want to stitch their software into many other corporate technologies, which makes their product harder to ditch. They want, in short, to become a “platform” — a word that appeared 39 times in Slack’s prospectus for potential investors and more than 300 times in Zoom Video’s IPO document in April.

Another thing that hasn’t changed from software’s olden days, at least for Slack, is a dependence on a relatively small number of big customers. Slack says it has more than 10 million daily users and 600,000 organizations that pay for use by three or more people. But about 40% of Slack’s revenue in the latest fiscal year came from just 575 organizations writing at least $100,000 in annualized checks to Slack. The company might be bottom-up in strategy, but it still needs the whale customers to pay its bills.

Slack isn’t alone in this regard. Domo Inc., which makes corporate data analysis software, generates nearly half of its revenue from 450 top-paying customers. At Zoom, a few hundred customers generate 30% of revenue. Of course, some kinds of technologies — think databases or inventory-management systems — aren’t likely to appeal to employees and instead are pitched straight to tech-buying executives. That probably won’t stop startups from trying the new approach, though.

Courting the rank-and-file is now standard procedure for many types of software. But one old fashioned tactic has lasting appeal: Persuade big companies to write big checks.