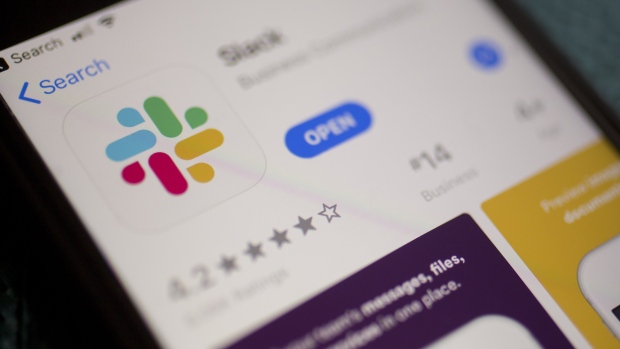 The Slack Technologies Inc. application is displayed in the App Store on an Apple Inc. iPhone in an arranged photograph taken in Arlington, Virginia, U.S. on Monday, April 29, 2019. Slack's filing last week confirms its plans to avoid a traditional public offering and instead list its shares directly on the New York Stock Exchange under the symbol SK. , Bloomberg

Slack lost US$31.9 million in the three months ended April 30, up 28 per cent from the year prior, according to its revised filing Friday with the U.S. Securities and Exchange Commission. Driven by a 42 per cent increase in paying customers to 95,000 as of April 30, Slack’s revenue for the quarter grew by 67 per cent to US$134.8 million.

That’s a far cry from some of the technology unicorns that have gone public this year in a wave of initial public offerings. On Thursday, Uber Technologies Inc., whose US$8.1 billion IPO is the largest of the year, reported a quarterly loss of US$1.01 billion on adjusted revenue of US$2.76 billion. The earnings report was the first since its May 9 IPO. Uber’s shares have fallen about 10 per cent since then.

Slack is on track for a direct listing on the New York Stock Exchange. The startup charges companies for enhanced features for its real-time messaging software. The company has more than US$1.1 billion in total assets, giving it little appetite to raise more money in a public offering. Instead, Slack is following in the footsteps of music company Spotify Technology SA and listing directly.

In the direct listing, current holders wanting to sell their shares will simply place them on the market. Unlike a typical IPO, there won’t be a roadshow in which underwriters market and sell new shares. Slack said in its filing Friday that its shares have traded privately for US$21 to US$31.50 apiece from Feb. 1 to May 30. The volume weighted average price per share for that period was US$26.38.

Slack also detailed in the filing that Chief Executive Officer Stewart Butterfield will retain his concentrated voting power for as long as a decade because of the dual-class share structure. Butterfield holds 17.8 per cent of the voting rights as of April 30, with other executives, directors and their affiliates holding another 47.8 per cent based on the filing.

Although multi-class stock remains popular with founder-led technology companies, it has drawn criticism from the SEC and Wall Street. Several indices have said they would stop adding companies with such share structures. At Slack, Butterfield and other owners of Class B stock get 10 votes per share.

The San Francisco-based company said it expects about 11.5 million of its Class A shares to be sold on the first day of trading because of restricted stock units that will vest that day, according to the filing. With an almost 24 per cent stake, Accel Partners and its affiliates is Slack’s largest shareholder, followed by a second venture capital firm, Andreessen Horowitz, with 13 per cent.

Banks advising Slack on the listing include Goldman Sachs Group Inc., Morgan Stanley and Allen & Co. and, with other financial advisers, are expected to share about US$22.1 million in fees, according to the filing. The share are expected to trade under the symbol WORK.