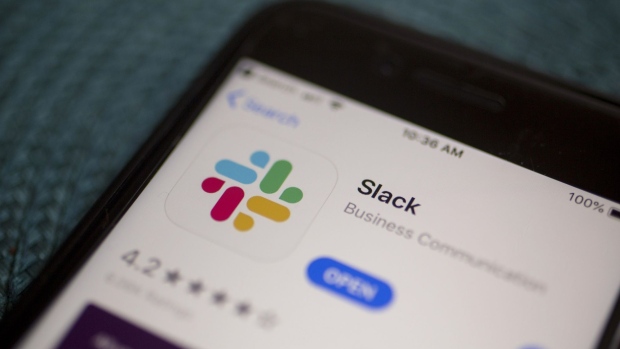 (Bloomberg) -- The Slack sidebar is getting an update, but you’re forgiven if you haven’t noticed.

Slack began rolling out the changes last Wednesday without fanfare, but it will take a few weeks to kick in for everyone. The new look is supposed to help users feel less overwhelmed, a frequent complaint heard by the ubiquitous workplace communications platform. Notification badges on the sidebar are now white instead of red, some extraneous icons are gone and there are more notification sounds to choose from. Overall, though, it doesn’t look much different.

The redesign, which took the better part of a year to complete, has so far flown under the radar. “We’ve literally heard no feedback, which is extremely unusual for our customer base,” Ali Rayl, Slack’s senior vice president of product, said in an interview. If no one really notices, she considers that a success.

There’s a lot on the line: Slack is expected to bring in $1.5 billion in revenue in fiscal 2023, Salesforce said in its earnings call on May 31. For more than 12 million active daily users as of 2019, including those at some of the world’s biggest companies, Slack has become virtually synonymous with work. Rather than launch a full redesign with one big splash — which can cause disruption for  users —  this is just a start.

“At our scale, changes can make a huge difference in the aggregate,” Rayl said. “If these changes save each user a minute, that’s a massive net boost.”

Another change users can expect in the near future: seeing only those channels with unread messages in the sidebar, though the others will remain easily accessible. That’s meant to cut down on the “cognitive calories” users are spending to navigate the interface.

Critics question whether changing the app’s interface will actually add to net productivity. According to research by RescueTime, a productivity app that tracks how users spend their time, office workers check email or messaging apps like Slack every six minutes, on average. The steady flow of notifications, DMs and updates can take over workdays, disrupting focus and making employees feel like they have to be available. Cues like flashing banners or bright red badges create a sense of urgency and encourage users to click. But now, many tech and social media companies are pumping the brakes. Last week, TikTok released a new feature that lets users set regular screen breaks.

Slack’s new, ghost-like notification badge is the redesign’s most obvious change. “It’s a way to lower the sense of urgency,” said Rayl. Right now, Slack has no way of knowing which messages are truly pressing, but the ultimate goal is to create an “infinitely intelligent” system that can use artificial intelligence to present one message at a time in order of importance. While it’s a powerful concept, it would be extremely difficult to get right, ethically and functionally, Rayl said.

For the time being users can customize their settings to limit work-disrupting notifications. If the ubiquitous “knock brush” sound is triggering, users can change it up with something new, like “hummus” or “ yoink.”