Slack Technologies Inc. (WORK:UN) shares tumbled in pre-market trading on Thursday, after the workplace-collaboration software company disappointed with its first report as a public company.

While the second-quarter results beat expectations, the company projected slower sales growth for the second half of the year. Analysts wrote that this “anemic” outlook wasn’t as “robust” as had been expected, in the words of Bernstein analyst Mark Moerdler.

Shares sank 13 per cent before the bell. The company went public in June with an IPO price of US$26. While the implied pre-market move suggests Slack will hold modestly above that level, the drop extends a lengthy downtrend.

Barclays described the stock sell-off as “growing pains,” noting that the company’s newness meant it had no track record with how to evaluate its outlook. Until investors determine whether Slack was being conservative with its projections or facing heavier competition, shares could face volatility, it added. 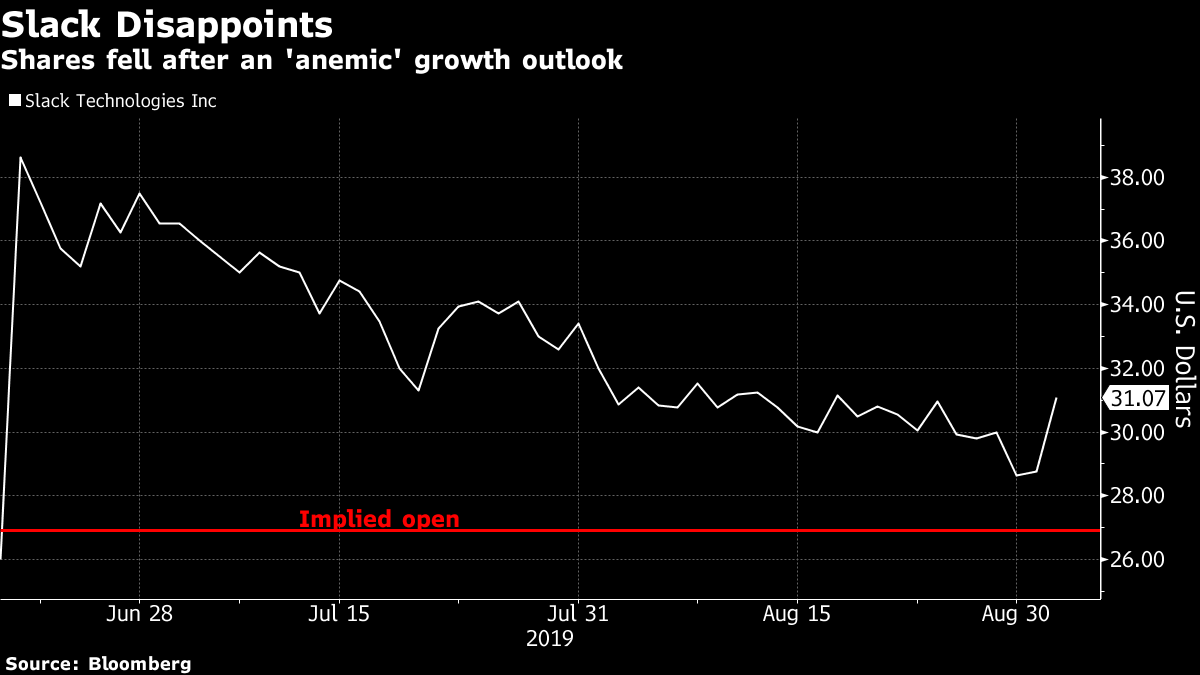 Slack and investors “are still only getting used to each other, which is causing some growing pains.”

While results were “healthy when considering the scale of the business,” the outlook suggested a deceleration in growth in the second half of the year. It is currently unclear whether this is because Slack’s management is being conservative, or whether it is facing more competition from Microsoft teams.

“Since there is no guidance track record, only time will tell, which might create short-term issues for the shares.”

Remains overweight on the stock but trims price target by US$1 to US$44.

The “otherwise strong print” was “clouded” by a one-time charge related to service disruptions in the quarter. Notes that both revenue and billings came in ahead of forecasts.

“While we view Slack’s collaboration platform as best-in-class, at current levels, we believe this is factored into the valuation.”

The third-quarter outlook “shows anemic growth” that was “not as robust as expectations.” While Slack will “continue to be a leader,” there is more competition coming into the space.

Market-perform rating, price target lowered to US$29 from US$31.

The outlook “might be a tad conservative,” given the stock had a “thin margin of error” due to its valuation.

“Slack’s billings and sales growth outlook will likely remain pressured in the near term,” in part because of higher competition.