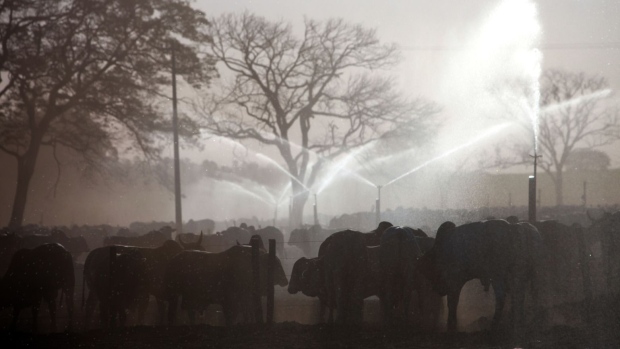 Cattle graze on a ranch in Brazil. , Jessica Brice

(Bloomberg) -- A few feeder farms to some of Brazil’s top beef producers have used slave labor, according to a new report, adding urgency to government and corporate promises to clean up the meat supply chain.

These farms represent a tiny fraction of the hundreds of thousands of direct and indirect suppliers to both JBS and Minerva. In JBS’s case, the purchases were made before the offenders were added to the so-called Dirty List, a rolling government database the company checks daily to make sure it’s not running afoul of labor commitments. And cattle that may have ended up in a Minerva slaughterhouse hopped from farm to farm first, making the animals more difficult to track.

Even so, the report is another example of the growing pressure the beef industry is facing as investors and consumers demand more sustainable supply chains. It also adds to evidence that Brazil’s budget-strapped regulators may not be keeping close enough tabs on a sprawling network of ranches that are among the primary perpetrators of deforestation, as well. Most cows in the South American nation are grass-fed, and renegade ranchers there are known for using fire and axe to clear pasture land in the far-flung Amazon rainforest and Brazil’s Cerrado savanna. Historically, slave labor in Brazil’s livestock industry has often been tied to this burning of land rather than cattle-rearing itself.

Read More: Why It’s So Hard to Stop Amazon Deforestation, Starting With the Beef Industry

According to Reporter Brasil, which was a sponsor of a 2005 pact with companies including JBS to abolish modern-day slavery, federal inspectors who searched the properties accused of abuses found some workers living in shacks made of tree branches, often without access to toilets, kitchens or clean water for drinking and bathing. One 65-year-old man allegedly couldn’t get medical care for days after red-hot metal flew into his eye.

JBS said in a statement that it “strictly complies” with all its commitments to fight slave labor and deforestation by monitoring direct suppliers. In the cases mentioned, it blocked farms as soon they appeared on the government’s Dirty List. Minerva said by email that it never did business directly with the rancher called out by Reporter Brasil and that it doesn’t have enough “legally available” government data to find any irregularities related to the direct supplier.

While Brazil’s top three beef producers—JBS, Marfrig Global Foods SA, and Minerva—monitor direct suppliers of cattle for slaughter, they say they have no way to accurately track who those farms buy their animals from. JBS and Marfrig have vowed to solve the problem using blockchain technology.

“There’s no mechanism to track suppliers,” said Marcel Gomes, executive secretary of Reporter Brasil. Most violations “happen on properties that transfer to other properties.”

The labor secretariat within the Economy Ministry said it couldn’t comment on the specifics of the cases because it hadn’t seen Reporter Brasil’s report.