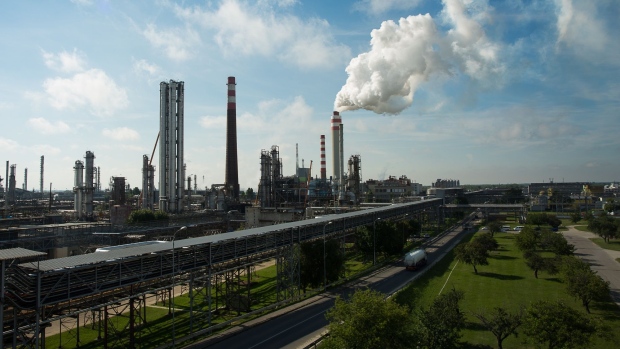 BRATISLAVA, SLOVAKIA - MAY 31: A general view of a section of the Slovnaft Oil Refinery on May 31, 2022 in Bratislava, Slovakia. Slovnaft, Slovakia's only oil refinery specialises in fuel retail, petrochemicals and retail. Slovnaft belongs to the Hungarian MOL Group and imports Urals oil from Russia. Slovakia is the most dependent country in the EU when it comes to oil from Russia. Slovakia belongs to the 10 biggest importers of Russian oil (big processed part is exported further from Slovakia). The refinery produces 5.5 million tons of oil yearly when over 95% comes from Russia and the rest is transported via the Adria oil pipeline. According to the data from 2019, Slovakia imported 78% of oil and refinery products from Russia. The oil from Russia is imported through the Druzhba pipeline. The Refinery exports two-thirds of its production. (Photo by Zuzana Gogova/Getty Images) Photographer: Zuzana Gogova/Getty Images , Photographer: Zuzana Gogova/Getty Images

(Bloomberg) -- Slovakia’s only oil refiner is preparing to sharply ramp up international crude purchases as part of the country’s pivot away from Russian supplies.

While Slovakia has an exemption allowing Mol Group’s Slovnaft refinery to keep taking Russian barrels through the giant Druzhba pipeline, European Union rules prohibit the company from turning that crude into fuels for re-export. As such, it will need to boost foreign imports.

Slovnaft Chairman Oszkar Vilagi on Tuesday warned that the steps may still not be enough to prevent diesel shortages in the region. EU sanctions will all but cut off Russian seaborne deliveries from Feb. 5, and buyers face a sharp crunch unless they can source alternative barrels. An alternative oil route is the Adriatic pipeline, but its capacity is far short of Hungarian and Slovakian refinery needs.

“In case of unexpected complications with pipeline oil supplies next year, Central European countries will face a shortage of diesel and other refinery products,” Vilagi told reporters in in Bratislava. “Slovnaft would not be able to fulfill its exports for the neighboring Czech Republic” if there are any crude shortages, he said.

Slovnaft — which has a capacity of about 124,000 barrels a day — exports 60% of its output mainly to its central European neighbors — the Czech Republic, Austria and Poland. It aims to replace 60% of its crude usage with non-Russian supplies by next December, when an exemption allowing Slovakia to keep sending products made from Russian crude to the Czech Republic only will expire.

Sourcing alternative supplies and adjusting processing will be costly and time consuming.

“Our refinery must buy two tankers of non-Russian crude per month from February next year to keep exporting products, and four to five tankers per month from December 2023,” Vilagi said. Fully adapting to process light crude oil will need hundreds of millions of euros in investment and build the necessary infrastructure will take years.

Vilagi also said a windfall tax on energy profits could curb the company’s investments in infrastructure, which would allow the processing non-Russian oil on a larger scale.