The gains are smaller, befitting a less hysterical year. When the S&P 500 Index has risen in 2021, the daily increase has been half what it was in 2020. But in terms of persistent, day-after-day gains, these seven months in the U.S. stock market have few historical precedents.

Virtually doubling from a bear market bottom in 17 months, fueled by Federal Reserve stimulus, the seemingly never-ending succession of little gains has somehow become the fastest rally since 1932. Up 31 per cent from its previous peak, the benchmark gauge for American equities is already beating the median-increment gain seen in the last 13 bull markets.

And there have been a lot of records. The S&P 500’s 48 all-time highs since the end of December mark the best start to a year since 1995. Over the last century, there has been just one other year when the benchmark set more high-water marks by this point in the summer -- in 1964.

“I was bullish and I was expecting a good run, but it has even exceeded my expectations -- it’s been pretty remarkable,” said Randy Frederick, managing director of trading and derivatives for Charles Schwab Corp. “It’s difficult to be a bear in any market and, frankly, if you’re a bear, you’re probably not going to last very long.” 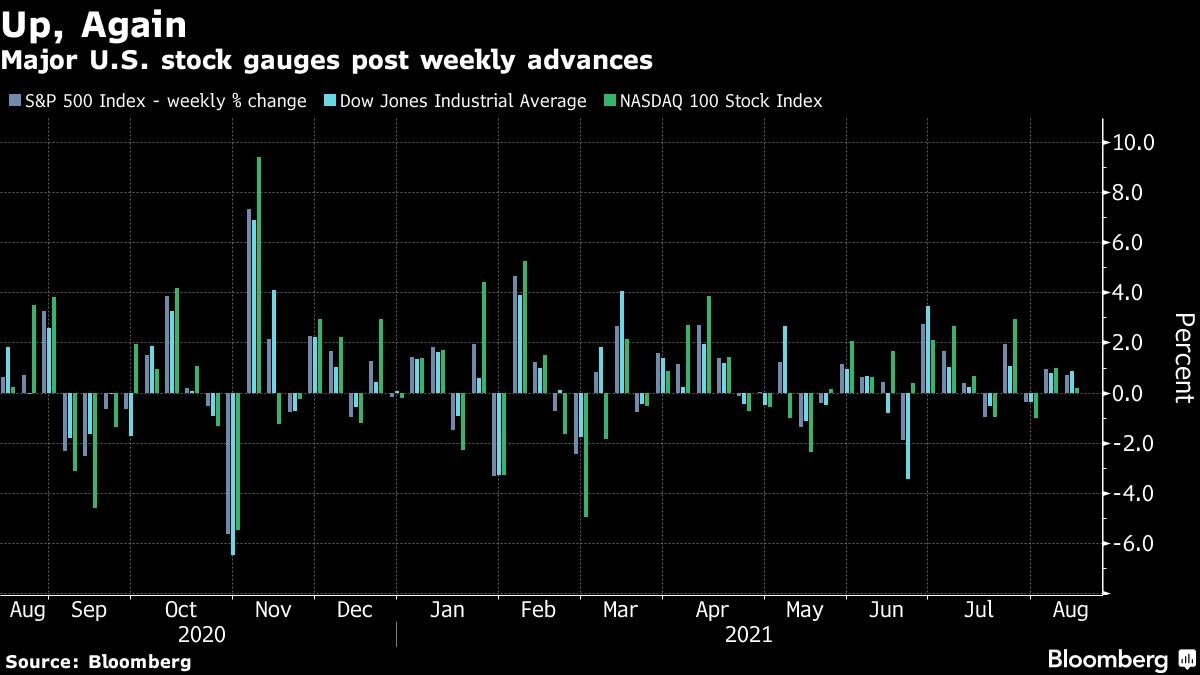 And while last year’s rally was panned for lifting too few ships, this year’s has been broader. For nine months now, more than 65 per cent of securities trading on the New York Stock Exchange have held above their 200-day moving averages, the third-longest such span in five decades, according to Sundial Capital Research.

That the market has moved that far, that fast is not surprising considering how quickly economic growth bounced back, said Art Hogan, chief strategist at National Securities.

“What I think the market has really keyed into has been the remarkable recovery that we’ve seen in both the economy and corporate earnings,” he said by phone. “The real driver for this market having this massive recovery off the March 23rd low has been much better-than-expected economic data across the board and earnings growth that far surpassed the most-aggressive analyst expectations.”

Going into August, warnings were everywhere that the traditionally challenging month could bring choppiness. To say none has materialized is an understatement. August is shaping up to be one of the calmest months on record. The S&P 500 has fluctuated at an average 0.5 per cent each day, a level of tranquility that, except for 2017, has rarely happened. CBOE’s volatility index sits at the lowest in six weeks.

“It’s been Steady Eddie,” said Chris Gaffney, president of world markets at TIAA Bank. “I’m not surprised by the sharp rebound that we’ve seen in the equity markets and the environment still remains very good for equities.” 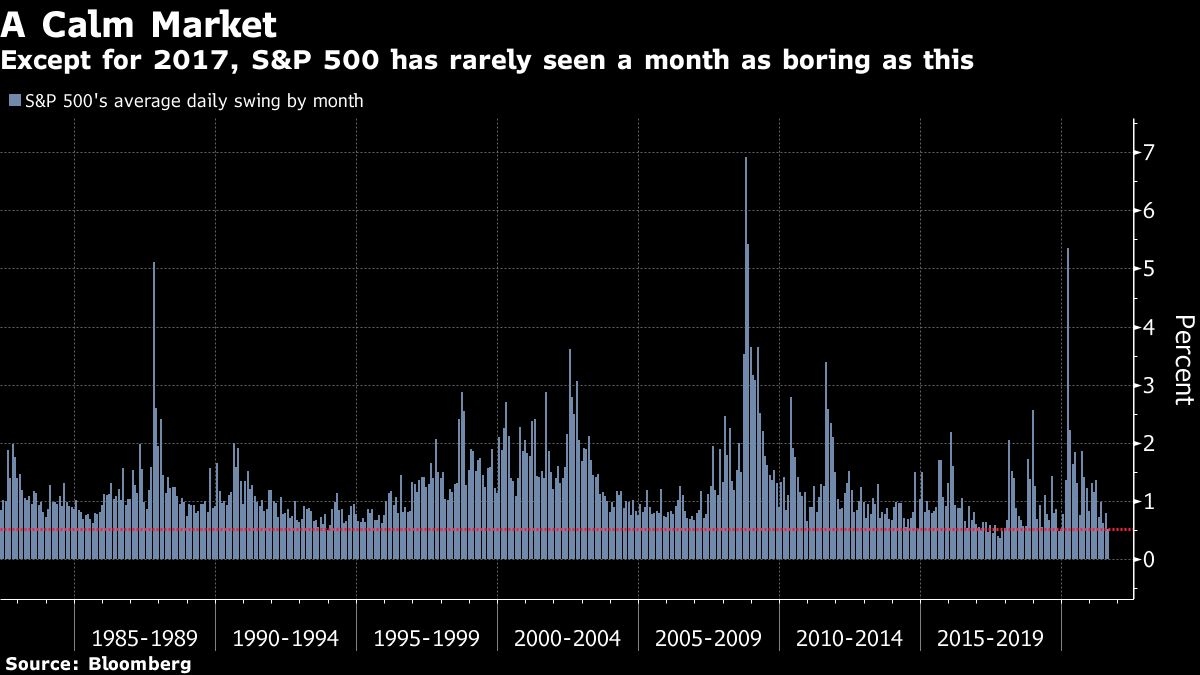 The pattern of slow-motion advance continued this week. The S&P 500 scored four straight records to end at 4,468, with daily gains capped below 0.3 per cent. The gauge added 0.7 per cent in the five days for its sixth weekly gain in the past eight. The Nasdaq 100 edged higher by 0.2 per cent, while and the Dow Jones Industrial Average added 0.9 per cent.

Does nobody think the market will fall again? One place where a version of nervousness exists is in VIX futures, instruments used mostly by professionals that tend to pay off when the market’s in trouble. Right now, six-month contracts on the VIX are trading at 7.7 points above the cash index, a premium that hadn’t been seen since 2016, data compiled by Bloomberg show.

“You hedge because you’re long, and all of this hedging actually feeds into this complacency” Mark Sebastian, founder of Option Pit LLC, said on Bloomberg TV. “The market sells off, I don’t get scared because I’m hedged, so there’s no follow-through to that market selloff, it gets bought on the dip and it starts to rally and my position does even better.”

To Gareth Ryan, managing director at Iur Capital Ltd., a derivatives-focused investment firm, the grinding higher offers a good opportunity to short volatility, at least before the Federal Reserve’s policy meeting in September. The firm has been selling options in anticipation that these contracts are unlikely to get exercised in a tight market, allowing them to keep the premium.

“Earnings are out of the way. The Fed is quiet,” Ryan said by phone. “There is not much to really move things for the market and for volatility in particular.”

With volatility muted and an uptrend persisting, any trading tools that told investors to do anything but buy are failing. When applied to the S&P 500, half of the 22 charts-based indicators tracked by Bloomberg have lost money since the end of March, back-testing data show. All of them are doing worse than a simple buy-and-hold strategy, which is up 12 per cent.

That means this year has not been kind to bears. The S&P 500 has exceeded the most optimistic target from the start of the year, forcing strategists to capitulate. At the same time, it’s gone almost 200 days without a 5 per cent pullback.

At least four strategists have boosted their year-end price targets for the S&P 500 over the past month, including Goldman Sachs Group Inc.’s David Kostin, whose projection increased by 400 points to 4,700. Short sellers are driven almost into extinction, with an index of their most-favored targets going against them and surging more than 40 per cent this year.

“A 5-to-10 per cent pullback, we haven’t had that yet. That’s pretty extraordinary,” Alicia Levine, head of equities and capital markets advisory vice-chair of the investment committee at BNY Mellon Wealth Management, said on Bloomberg TV and Radio. That’s not to say it can’t happen, she said, “but the direction of travel is upward.”