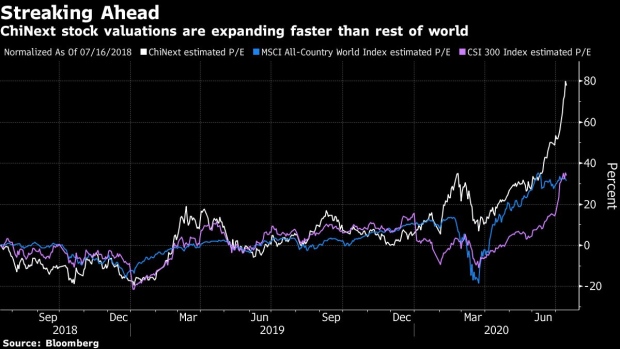 The Chinext gauge was down 1.3% by the midday break and headed for its first back-to-back losses since the start of June. Declines were triggered on Tuesday after some government-backed funds sold stakes or outlined plans to do so, sending turnover to a record 135 billion yuan ($19 billion). The drop followed a rally that had sent the tech-heavy gauge up more than 60% this year.

Signs of Beijing’s unease over the speed of the market’s gains are showing up in officials’ measured steps to remove some of the froth -- from cautionary articles in state media to China’s securities regulator shaming 258 illegal margin financing platforms. The country’s banking regulator said late Tuesday it would “strictly prohibit” unregulated funds flowing into the stock market.

Still, leverage and turnover are picking up in a sign that retail investors are still piling in. It’s taken the value of Chinese equities to almost $10 trillion, a level that marked the top of a bubble five years ago.

And nowhere is the exuberance more evident than the ChiNext. By one measure, it has been rising faster than ever before, with its relative-strength index hitting a record on Monday, despite increasing tensions with the U.S. and a cloudy economic outlook.

Below are some of the indicators that show how unprecedented the rally in the ChiNext has been.

The relative strength index for the ChiNext climbed on Monday to the highest level since the gauge was first compiled, far above a threshold that suggests an overbought market. The RSI was higher than that on any of the 93 benchmarks tracked by Bloomberg worldwide.

Market turnover for the ChiNext jumped to the highest on record on Tuesday, and far above the peak in 2015 when the gauge led the bubble in Chinese equities.

In a sign of how broad the rally has been, 95% of ChiNext members traded above their 200-day moving averages. That’s the highest since 2015 before the boom turned to bust.

While the ChiNext is still nowhere near as expensive as it was at the peak in 2015, valuations are catching up fast. The gauge trades at 41 times estimated earnings for the next 12 months, the highest level since December 2015. That compares with 32 times for the Nasdaq and a multiple of 19 for the MSCI All-Country World Index.