Central banks are beginning to tip toe away from their emergency monetary settings, with South Korea following in the footsteps of New Zealand and Canada to flag a potential interest-rate increase.

As vaccines roll-outs continue and economies reopen, traders have been slowly dialing up expectations on rate hikes or a slowing of asset purchases elsewhere too. Markets are seizing on the tightening narrative, with bond yields and currencies fluctuating as investors recalibrate their bets. 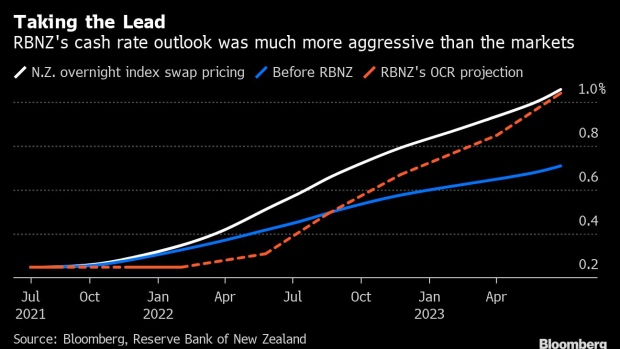 The Bank of Korea became the latest on Thursday to signal a turn when Governor Lee Ju-yeol said policy makers are preparing for an “orderly” exit from its record-low interest rate at some point as the economy recovers. The shift in stance came a day after New Zealand’s.

New Zealand’s outlook was much more hawkish than expected and may yet signal a global shift, according to Sharon Zollner, chief economist at ANZ Bank New Zealand in Auckland.

“We can’t rule out that the tail may wag the dog, influencing global market expectations of whether other central banks may also take a more hawkish turn,” she said.

Financial markets have already brought forward pricing of the Federal Reserve’s first rate hike by almost a year since early February. Over the same period, market expectations from the Bank of England have switched from rate cuts by late 2022 to a rate increase, while investors have almost abandoned bets on further European Central Bank reductions to instead price in a 10 basis-point upward move by the end of 2023.

With major central banks embroiled in bond buying and other easing programs which traditionally get wound down first, most rate hikes remain some way off. But talk of a taper in asset purchases is catching on.

Fed Vice Chair Richard Clarida told Yahoo! Finance in an interview Tuesday that there may be a point in upcoming policy meetings where officials can discuss scaling back purchases.

Fed Vice Chairman for Supervision Randal Quarles said on Wednesday that it will be important for the central bank to begin discussing in coming months plans to reduce its massive bond purchases if the economy continues to power ahead.

The BOE has slowed bond-buying and signaled that it’s on course to end that support later this year. Australia’s central bank has set July as a deadline for deciding on whether to extend purchases.

Norway is on track to start a hiking cycle, and Iceland has already begun. The Bank of Canada announced last month a reduction in debt purchases as it forecast a faster economic recovery that may pave the way for rate increases next year.

“The shift in monetary policy is starting,” said Alicia Garcia Herrero, Hong Kong based chief economist for Asia Pacific at Natixis, who used to work for the ECB and International Monetary Fund.

Detailing its new outlook, the Reserve Bank of New Zealand on Wednesday published forecasts for its benchmark rate -- for the first time in more than a year -- that show the rate beginning to rise in mid-2022.

To be sure, this shift is still conditional.

RBNZ Governor Adrian Orr said the bank’s outlook is predicated on the economy recovery continuing as vaccines roll out and the pandemic is contained. In a similar vein, BOK’s Lee said the board unanimously agreed to hold rates at a record low on Thursday as pandemic uncertainties persist.

The Fed’s Clarida also qualified his remarks around employment data and how inflation pressures play out, which he expects to be transitory.

It’s also the case that not every central bank is signaling a policy move, not least in the euro zone, where ECB Executive Board member Fabio Panetta said on Wednesday that he hasn’t seen a shift in the economic outlook to justify a reduction in bond purchases.

In emerging markets, the shift is splintering. Hungary’s central bank said this week it was ready to deliver monetary tightening, and Russia, Turkey and Brazil have already hiked. The People’s Bank of China is holding the line with relatively disciplined stimulus, while others continue to support growth as the virus continues to spread.

“There is growth divergence due to a much slower vaccination process in the emerging world and renewed waves,” said Garcia-Herrero. “They will suffer from a double whammy as the Fed starts moving towards tapering.”