Pattie Lovett-Reid: Rates going up, spend at your own peril

A one-year slide in Canadian consumer confidence showed little sign of improving in January, with sentiment levels hovering at depressed levels amid turmoil in financial markets and signs the nation’s economy has hit a soft patch.

The Bloomberg Nanos Canadian Confidence Index, based on weekly telephone polling, ended the month at 54.2, little changed from average readings since the end of November that are near the lowest in almost two years.

Household sentiment has been on a slow downward trend, even with the lowest unemployment rate in more than four decades -- suggesting Canadians either aren’t feeling the benefits of the expansion or are worried the economy remains fragile.

“Maybe things are better on paper, but it doesn’t feel like it’s better off” for many Canadians, said Nik Nanos, chairman of Nanos Research Group.

While pessimism remains strongest in the West, there are signs it’s spreading beyond the nation’s battered oil economies into Ontario, whose confidence gauge last week fell to the lowest since July 2015.

Every week, Nanos Research asks 250 Canadians for their views on personal finances, job security, the outlook for the economy and where real estate prices are headed. Bloomberg publishes four-week rolling averages of the 1,000 telephone responses. A composite indicator -- the Bloomberg Nanos Canadian Confidence Index -- is also calculated from the rolling averages of the four questions. 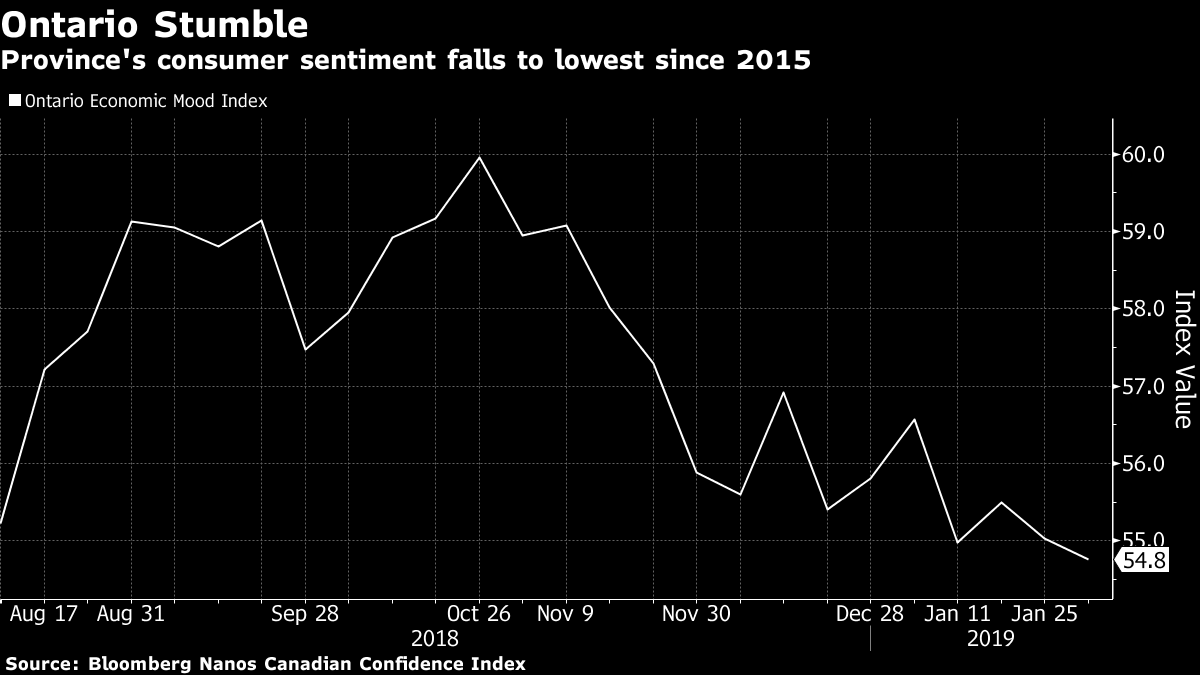 “This speaks to the fragility of the economic mood,” Nanos said.

Consumer confidence can be a good barometer of an economy’s overall health, so the sluggish readings may cast doubt about how strongly Canada will be able to emerge from the current slowdown, which is being driven by weakness in the oil sector.

Canada is currently in the middle of what economists believe is only a temporary soft patch -- with growth hovering at around 1 per cent. The central bank expects the slowdown to last through the first few months of this year before growth rebounds this spring to levels closer to 2 per cent.

The recent confidence trends will be worrying to Prime Minister Justin Trudeau, since the prolonged slump isn’t unlike what happened in the lead up to 2015 elections. Economic angst was at the core of the Liberal Party’s election narrative that year, and Trudeau’s winning platform was built around growing incomes and easing middle class anxiety.

The opposition Conservative Party, which lost power in 2015, has already begun to turn the tables, using economic dissatisfaction to attack the government’s record all last week.

A major concern for Trudeau should be weakening job security numbers, Nanos said. Only 46 per cent of respondents said they are completely secure in their jobs, one of the lowest readings over the past four years.

“When the jobs number starts to move, politicians should take note,” he said. “The Liberals really have to worry about that as a potential indicator of a much deeper level of concern.”

The latest polling data also shows 28.5 per cent of Canadians said their finances had deteriorated over the past year, up from 24.9 per cent a month earlier and the highest since January 2017.