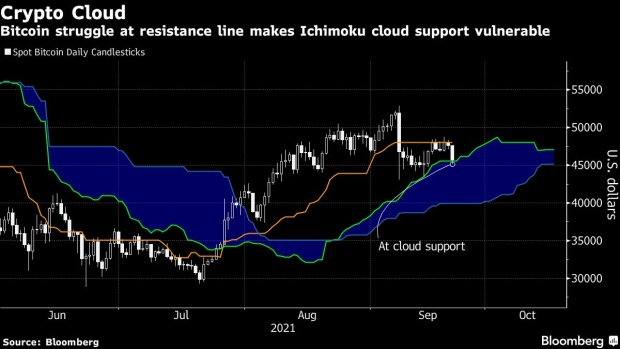 (Bloomberg) -- Bitcoin and U.S. stocks are moving increasingly in lockstep as investor anxiety builds ahead of this week’s Federal Reserve meeting, which is expected to flag the prospect of a reduction in stimulus.

The 30-day correlation between the largest digital currency and the S&P 500 Index is around the highest since October last year. Bitcoin and the benchmark U.S. equity gauge have dropped at least 2% this month.

“There’s a bit of uncertainty in the markets with the upcoming Fed taper talks and meetings,” said Vijay Ayyar, head of Asia Pacific with crypto exchange Luno in Singapore, adding that backdrop helps to explain the correlation shift.

Bitcoin fell as much as 6.5% and was trading around $44,850 as of 8:50 a.m. in London on Monday. Other tokens such as Ether retreated, as did the wider Bloomberg Galaxy Crypto Index.

El Salvador’s President Nayib Bukele said the country had “bought the dip,” adding 150 coins to raise its total holdings to 700 -- about $32 million based on current pricing. The nation recently adopted Bitcoin as legal tender in a controversial move that met with technical glitches and protests.

“Overall market sentiment is risk-off and wait-and-see,” said Esme Pau, an analyst with China Tonghai Securities in Hong Kong, who added that she expects the Bitcoin price to “whipsaw” in the near term.