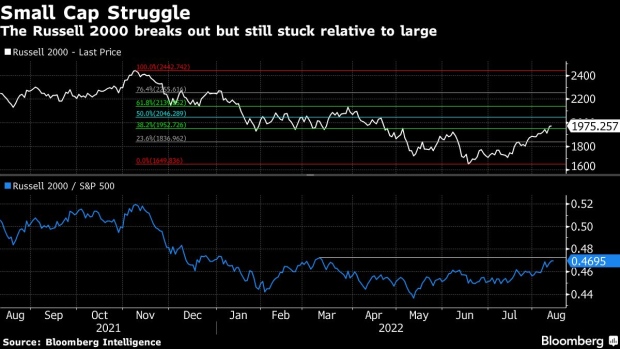 (Bloomberg) -- It’s been an upward grind for small-cap stocks the past month -- and investors are taking notice.

The Russell 2000 gauge of small caps, which has underperformed the benchmark S&P 500 since December, crossed its 200 moving-day average Friday as macro factors from the strengthening of the dollar to the narrowing of credit spreads helped give a leg up to smaller companies.

Among those growing more positive on the more-speculative stocks is Ned Davis Research, which shifted its tactical recommendation to small caps from large caps. The change is mostly driven by technicals, the firm’s chief US strategist Ed Clissold and senior quantitative analyst Thanh Nguyen wrote in a note dated Wednesday, but is also supported by valuations and interest rates, among other factors.

“Small caps tend to outperform in early stages of a market rally. They have high betas and they tend to be more oversold,” Clissold said by phone. “Small caps have room to outperform for at least the next several weeks.”

For Lori Calvasina, head of US equity strategy at RBC Capital Markets, recessionary periods are great times to buy small caps. She said the US equity market has already priced in a mild recession at the June low.

Small companies “tend to lag heading into recessions, but tend to start outperforming midway through recessions once broader markets start to bottom,” she said by email. “We see a lot of other things that make us want to buy small caps right now and even though we aren’t completely convinced stocks broadly have bottomed.”

She cited valuations as a key reason, as well as the recent earnings resiliency as small caps have made fewer cuts to earnings guidance. Calvasina added that tinier firms appear to be pricing in a lot more pain on the economic front than larger peers amid a spike in jobless claims, as well as a sharp drop in manufacturing activity to levels close to a typical trough. Large caps, meanwhile, are taking longer to reflect the deteriorating economic narrative, she said.

US stocks finished the week on solid footing, with the S&P 500 notching its fourth straight week of gains -- the longest winning run since November -- and big tech leading gains on Friday. The gauge recouped half of its losses from January through June. Investors continue to assess the next possible moves of the Federal Reserve given the recent slew of economic data.

While recession chatter has subsided somewhat in the past few days as evidence of a peak in inflation strengthens, many are still reluctant to announce that a bottom was set by the June nadir.

Despite the Russell 2000 trading back to its February to April range, the index still isn’t gaining significant traction versus large caps, according to Bloomberg Intelligence strategist Michael Casper. That trend needs to reverse “to cement a renewed uptrend for equities at large,” he wrote in a note published Friday.

Ned Davis Research also says the group is not out of the woods yet. If inflation remains high and the Fed keeps hiking aggressively enough to push the economy into a recession, the expected slower economic growth would be a detriment to small caps, Clissold and Nguyen wrote.

“The Fed does not have a great track record of soft landings (about 25% success rate), and supply chains and the Ukraine War add several degrees of difficulty,” they said. “A Fed policy mistake could mean a renewed downtrend for small cap.”

It remains to be seen whether the rally in small caps is sustainable. Cameron Dawson, chief investment officer at Newedge Wealth, warns this could merely be a “head fake” similar to the one seen in 2021.

“Small caps only have sustained rallies coming out of the lows of a market cycle, when liquidity is abundant thanks to Fed easing and earnings are poised to rebound sharply,” Dawson said. “That is not the case today. The Fed is not set to start injecting liquidity into the market any time soon and earnings are not depressed or set up for a rapid expansion.”

(Updates chart and market values throughout)