Showrooming a 'major problem' for small business heading into the holidays

Owners of small Canadian firms have grown increasingly concerned about future business prospects, with the economy poised for a slowdown.

Small business confidence weakened to 56.1 in November, the biggest decline this year and to the lowest since March, according to a survey from the Canadian Federation of Independent Business.

The share of owners who expect their firm to be “much weaker” in the next 12 months reached its highest level in more than three years. Back then, Canada’s economy grew by a mere one per cent amid a prolonged deterioration of oil prices that hurt investment in one of the nation’s largest industries. 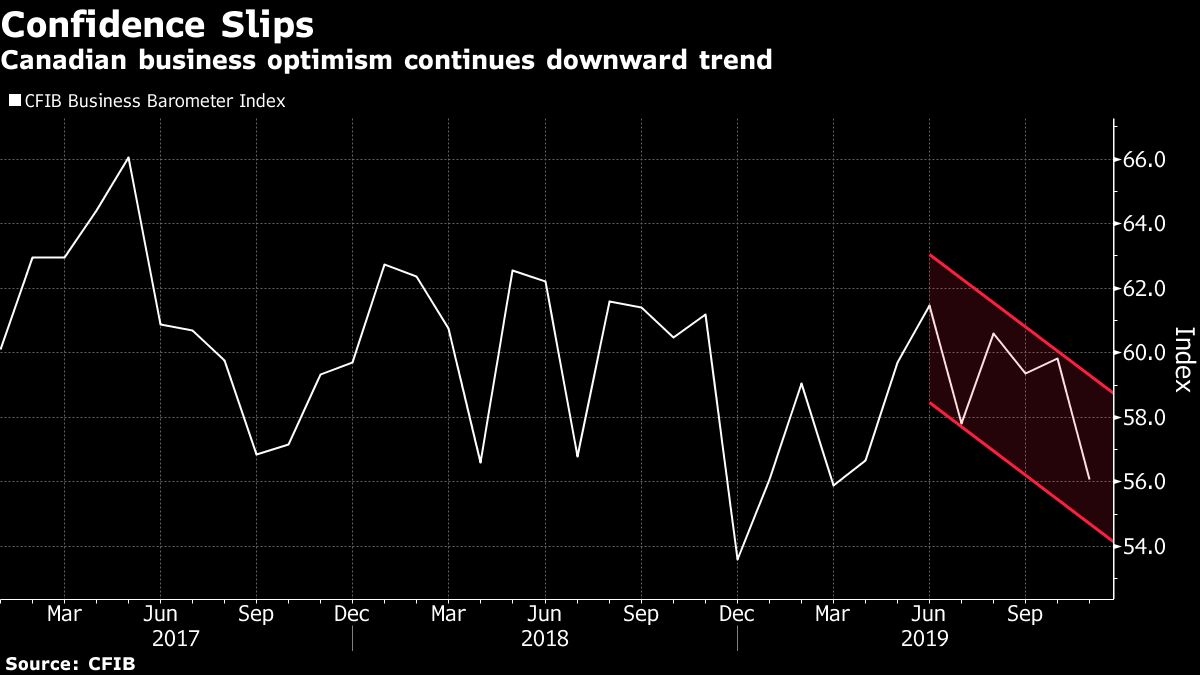 The report reinforces the view that Canada’s economy will decelerate in the second half of the year and into 2020 as global trade and geopolitical tensions stunt growth. The nation is also dealing with weakness in the natural resources sector from depressed energy prices.

And a growing number of proprietors are pessimistic on what 2020 will bring. The share of owners who said their business is in bad shape jumped to 18%, the highest level since 2016, the CFIB Index showed.

“On the whole, business owners are not feeling optimistic about their prospects for the next 12 months, especially in the Prairies,” CFIB Chief Economist Ted Mallett said. “The results we’re seeing harken back to the resource crunch of 2016. We can expect weaker hiring intentions in the short-term as a result.”

Business sentiment likely took another hit in November from the seven-day strike at Canada’s largest railway. The Canadian National Railway Co. strike, which lasted a week, disrupted key shipments of agricultural and mining products across Canada.

Respondents in the CFIB survey cite insufficient domestic demand as the main limitation on sales followed by a shortage of skilled labour. Meanwhile, energy prices and regulations are the major cost constraints. The survey comes just one day before third quarter GDP figures are due where economists expect growth to decelerate to 1.3 per cent from 3.7 per cent in the second quarter.