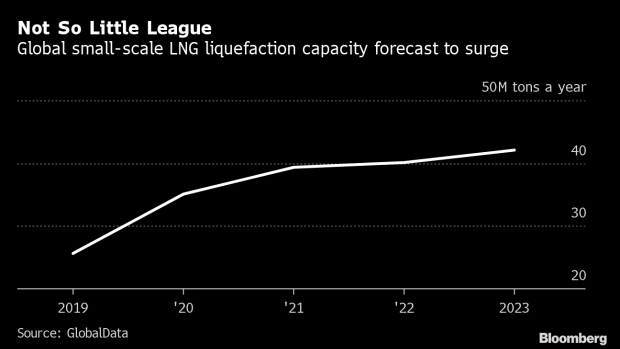 Not so little league , Bloomberg News

Giant ocean-going tankers built the liquefied natural gas industry into a US$150-billion-a-year business. The next expansion opportunity may come from ships a seventh of the normal size.

Fifty-five years after the first commercial LNG tanker sailed from Algeria, this segment of the gas industry is pushing into ever more niche markets, upending the economics of energy supply in the process.

Its next leap forward will be serving customers whose ports or budgets are too small to handle regular LNG tankers. Known as small-scale LNG, the idea is to make the fuel chilled to minus 160-degrees Celsius (256 Fahrenheit) accessible to factories, trucks, ships and even households. That’s set to spur production capacity growth of 58 per cent over the next five years, more than double the pace of the industry in total.

“We are just at the end of the beginning,” said Andrew Pickering, the chief executive officer of Avenir LNG Ltd. a London-based supplier set up less than a year ago to focus on the small end of the business. “Let the established players continue to develop large scale and see how we can connect the two.”

LNG already is the quickest growing part of the fossil fuel industry as customers switch away from more polluting forms of energy like coal. The super-chilled fuel is helping reduce smog in cities, it’s bringing affordable energy to isolated markets and even become a bargaining chip in U.S. trade talks.

The International Gas Union classifies a small-scale LNG vessel as one with capacity under 30,000 cubic meters. That’s about 1/7th of the biggest tankers from Qatar, the worlds’ biggest LNG producer.

The traditional ships helped create a global trade in the fuel, building an alternative for utilities and industrial customers to gas that arrives by pipeline. Smaller tankers can help LNG reach a growing number of buyers that only need a fraction of the cargo that a regular tanker can carry.

Gas burns more cleanly than coal, giving it less prominence in the debate about how to rein in climate change. Nations from China to the U.S. are investing in LNG as an alternative that allows the flexibility that doesn’t come with billion-dollar pipelines that link customers directly to often distant production fields.

With an LNG terminal, customers can take shipments from any of the countries that produce the fuel -- a group as far flung as Australia, the U.S., Algeria, Angola, Qatar and Russia. As new LNG production plants come online, market players are searching for where to place the increasing supply and finding small customers can absorb great volumes.

Global small-scale production is about 25 million tons per year. That’s a tiny part of the entire LNG industry, which handled more than 300 million tons last year.

Still, the small-scale end of the business may grow six per cent a year, according to the IGU. Pickering expects the sector can also make better use of floating import terminals, which may yield another 100 million tons in the next 10 years.

That’s caught the eye of some of the leading LNG producers. Qatar Petroleum and Royal Dutch Shell Plc and others are considering investments on the small-scale side of the industry.

OMV AG and the Italian pipeline operator Snam SpA said last month they may build a small-scale liquefaction plant in Austria to meet demand for LNG-powered trucks. Facilities for serving ferries are operating in Norway and gas-burning vessels are entering cruise ship fleets.

New Fortress Energy LLC, a venture of billionaire Wes Edens, plans to sell LNG across the Caribbean, Central America and West Africa and is already shipping the fuel to Jamaica. It’s seen benefiting from the “secular natural gas demand story, which is being driven by cheap and abundant” fuel in North America, said Gregory Lewis, an analyst at brokerage BTIG LLC. 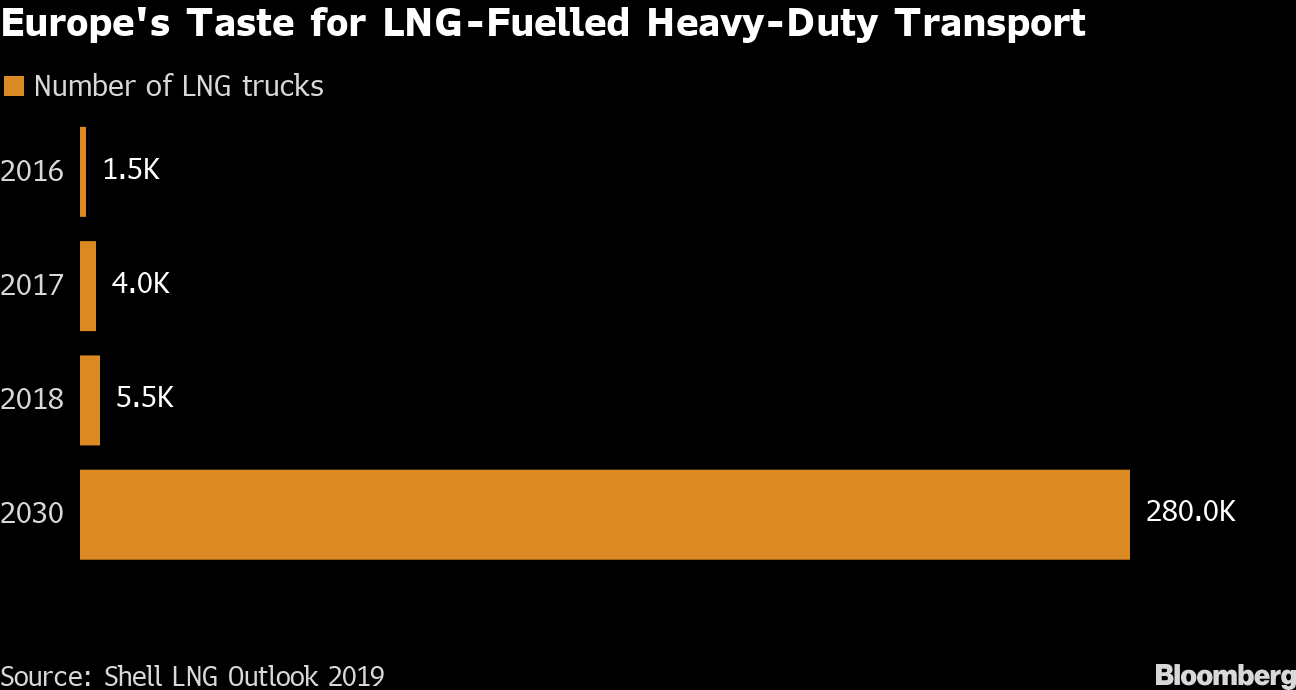 Avenir, an offshoot of shipper Stolt-Nielsen Ltd., intends to cover everything from ships and import facilities to distribution. It even hired a veteran LNG trader, Milorad Doljanin, as chief operating officer to wring as much value as possible out of supplies.

With six vessels and an LNG import terminal in Sardinia under construction, the London-based company is also looking to build in Scotland, the South Pacific and Latin America. Avenir is backed by Golar LNG Ltd. and Hoegh LNG Holdings Ltd., the biggest providers of floating terminals.

“Small scale is going to be a huge, huge part of the LNG industry going forward,” Hoegh LNG CEO Sveinung Stohle said at the Oil & Money conference in London on Tuesday. “We are extremely bullish on this.”

One big source of small-scale LNG will be from shipping as stricter regulations by the International Marine Organization on the sulfur content of marine fuel kick in from next year. LNG is one of the alternatives to replace dirtier oil product-based fuels.

“Are we too early? We think because of IMO 2020 and because the general awareness that gas is both environmentally better and clearly cheaper than conventional fuels that this is going to take off very quickly,” Avenir’s Pickering said. “So I’d rather be a little bit early to a party than too late.”