Prices paid to U.S. producers decelerated in December as two key drivers of inflation in 2021 -- food and energy -- declined from a month earlier, representing a respite in the recent trend of sizable increases.

The producer price index for final demand increased 0.2 per cent from the prior month after an upwardly revised 1 per cent jump in November, Labor Department data showed Thursday. From a year earlier, the PPI was up 9.7 per cent, the second-largest in figures back to 2010. 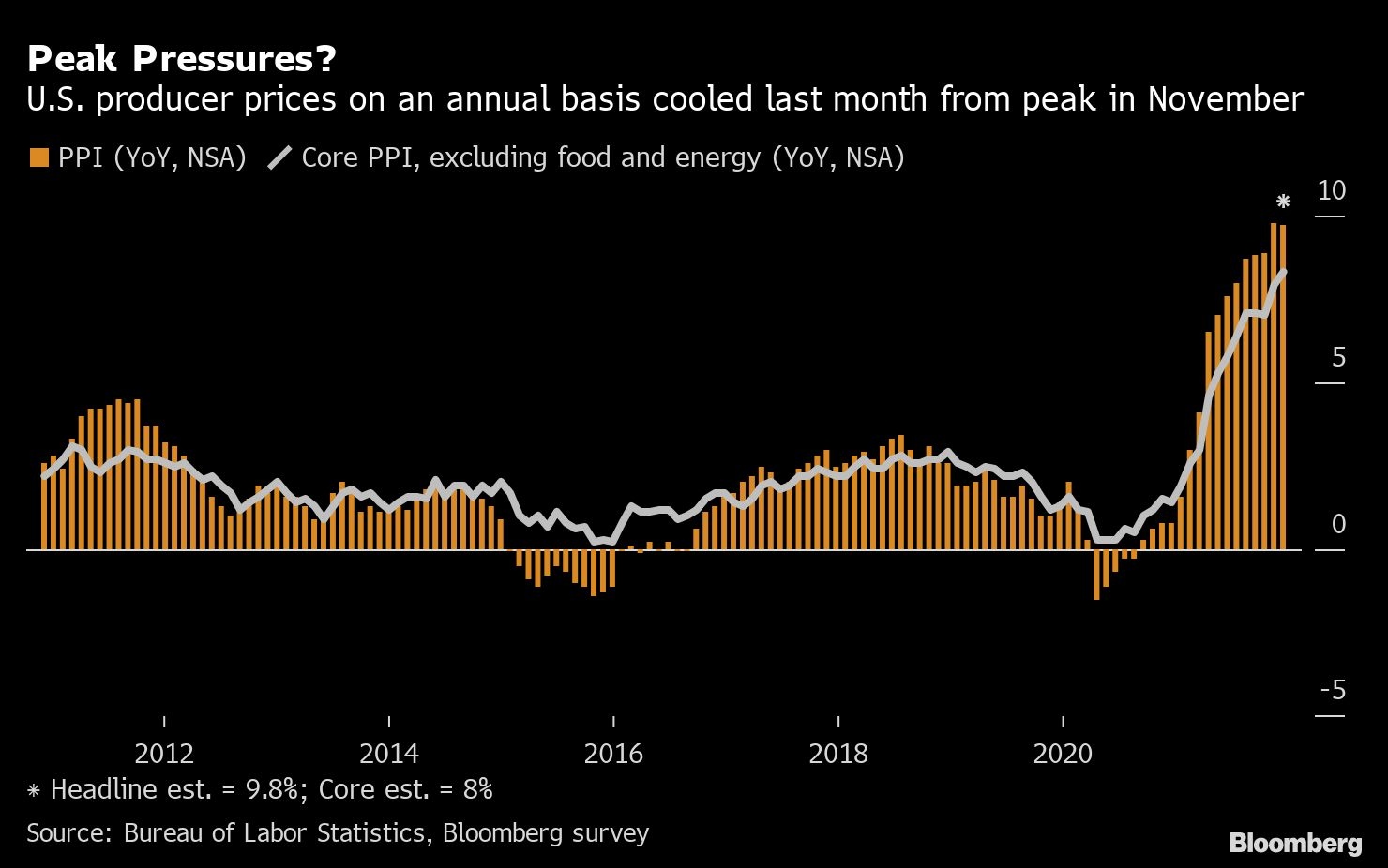 However, excluding the volatile food and energy components, the PPI climbed 0.5 per cent in December and was up a larger-than-projected 8.3 per cent from a year earlier.

The mixed report illustrates that while inflations remains elevated, underlying price pressures are showing signs of moderation. The prices of services increased from a month earlier, though less than the prior month.

The omicron variant presents an upside risk over the short term to goods prices in the months ahead, as quarantines and illness prevent many from working. A separate report Thursday showed applications for state unemployment insurance were the highest in two months.

“Producer prices ended the year on an encouraging note, rising less than expectations,” economists at Oxford Economics said in a note.  But “persistent supply disruptions will pin producer prices near record levels in the near term, especially given a rapidly spreading omicron variant that will fan inflation pressures.”

The median projections in a Bloomberg survey of economists called for a 0.4 per cent increase in the PPI from a month earlier and a 9.8 per cent annual jump.

A closely watched inflation gauge, the consumer price index, rose 7 per cent last year, the most in nearly four decades, according to data out Wednesday. The monthly advance exceeded projections, setting the stage for the Federal Reserve to begin hiking interest rates as soon as March. Economists expect consumer inflation to moderate over 2022.

Producer prices excluding food, energy, and trade services -- a measure often preferred by economists because it strips out the most volatile components -- rose 0.4 per cent from the prior month. Compared with a year earlier, the gauge increased 6.9 per cent.

“Wholesale and materials prices contributed to pricing pressures across a wide range of industries, spanning service providers and goods producers. Many contacts attributed the high cost of inputs to ongoing supply chain disruptions. Some Districts reported that transportation bottlenecks had stabilized in recent weeks, though procurement costs remained elevated.”

Costs of processed goods for intermediate demand, which reflect prices earlier in the production pipeline, declined 0.3 per cent in December, the first decrease since April 2020. Compared with a year earlier, the measure jumped 24.4 per cent.