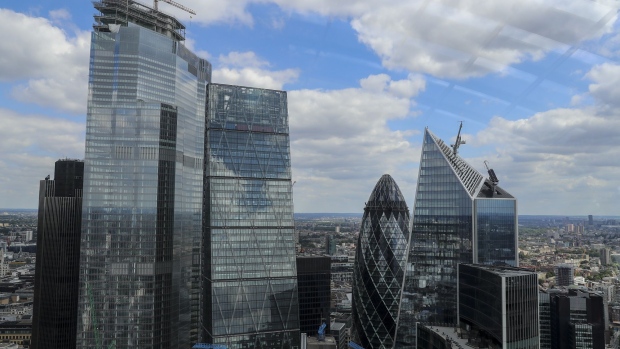 Skyscrapers stand in the City of London's square mile financial district in this view from the Sky Garden roof top viewing platform at the top of 20 Fenchurch Street in London, U.K., on Wednesday, July 3, 2019. There are fears that the U.K.'s pending divorce from the European Union, Brexit, will cause a precipitous decline of London as the undisputed financial capital of Europe. , Bloomberg

The world’s largest cities need to invest billions of additional dollars into their infrastructure in order to secure citizen data, new research suggests.

Of the roughly US$135 billion expected to be spent globally on cybersecurity for critical city infrastructure in 2024, 44 per cent will be split across data protection provisions for energy, health care, public security, transport, water and waste industries, analyst group ABI Research concluded in a study published Tuesday.

That equates to about US$59.4 billion and will not be enough, Dimitrios Pavlakis, an analyst at ABI Research, said.

In a statement accompanying the study, he said lackluster digital security investments could "jeopardize the key elements of intelligence, efficiency and sustainability of future smart city deployments.”

The concern echoes a growing consensus across government and industry that too little oversight is given to the fundamental technologies used to build connected cities. The U.S.-led blacklisting of next-generation 5G mobile networking products made by Huawei Technologies Co. -- the type being deployed to connect buildings, machines and people -- was driven by fears of espionage or attack by foreign state actors. The Chinese company has repeatedly contested such claims.

In their current states, urban areas with intertwined surveillance, health care and utilities networks in particular lack appropriate levels of security to deflect data breaches and cyberattacks, according to ABI Research.

The number of wide-area network connections used for objects such as street lamps, surveillance cameras and air quality sensors is projected to jump to about 1.3 billion by 2024, according to ABI Research, up from about 696 million today. Only half of those will be set up on networks capable of handling cyber-threats, the group said.