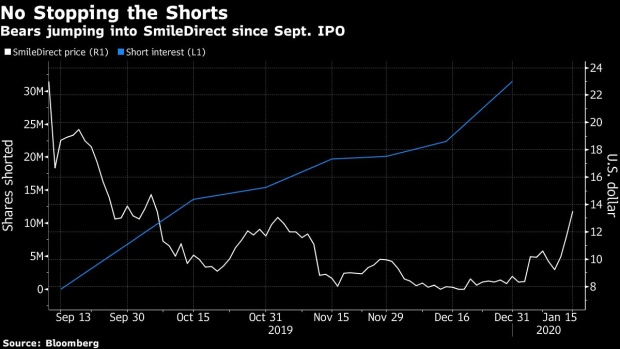 (Bloomberg) -- With SmileDirectClub Inc. shares rallying on the company’s plans to sell dental aligners to dentists and orthodontists, investors betting against the company could get burned.

The stock has climbed more than 30% since announcing its new marketing plan on Tuesday. But that’s not stopping short-sellers from jumping in even as borrowing rates on Wednesday climbed to 30% from 20%, according to Ihor Dusaniwsky, managing director of predictive analytics at S3 Partners.

“This is a legit squeeze candidate,” Dusaniwsky said in an email, although so far that hasn’t happened, as bearish bets against the Nashville, Tenn.-based company continue to pile higher. “I’ll call it a squeeze when I see a substantial decline in shares shorted,” he said. Data from the analytics firm show that 50% of SmileDirect’s free float is sold short, the highest since it went public in Sept.

After making $78 million in mark-to-market profits last year, short-sellers are down $176 million only two weeks into 2020, Dusaniwsky said in an email -- today’s 16% gain alone set bears back about $71 million. Bulls are pinning their hopes on the new marketing, together with a deal with Walmart, driving better returns.

Despite a 55% gain in the new year, SmileDirect is still more than 40% below an initial public offering price of $23.

To contact the reporter on this story: Cristin Flanagan in New York at cflanagan1@bloomberg.net

To contact the editors responsible for this story: Catherine Larkin at clarkin4@bloomberg.net, Scott Schnipper