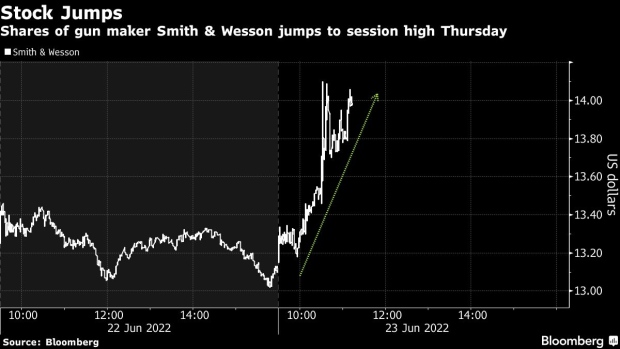 Smith & Wesson Brands Inc. and Springfield Armory Inc. semi-automatic pistols for sale at Hiram's Guns / Firearms Unknown store in El Cajon, California, U.S., on Monday, April 26, 2021. President Joe Biden's planned executive actions would crack down on "ghost guns," which can be assembled from kits and are not traceable by law enforcement because they lack serial numbers, as well as braces for pistols that make firearms more stable and accurate. Photographer: Bing Guan/Bloomberg , Bloomberg

(Bloomberg) -- Shares of gun manufacturers surged Thursday after the US Supreme Court established the right to carry firearms in New York, signaling a favorable outcome for the industry in the aftermath of recent mass shootings with calls for more restrictive gun control laws.

Smith & Wesson Brands Inc. led the rally, jumping as much as 7.6% to a session high after the decision was made to strike down a New York law that required people to show a special need to carry a handgun in public. Sturm Ruger & Co. climbed as much as 4.4% and Ammo Inc. advanced 4.3%, while Vista Outdoor Inc. gained 4.6%.

New York Governor Kathy Hochul weighed in on the decision calling the ruling “frightening” and added that it takes away the right to protect citizens. The ruling was the court’s biggest gun-rights decision in more than a decade.

The decision follows recent mass shootings that left a total of more than 30 people dead at a Buffalo, New York, grocery store and an Uvalde, Texas, elementary school. The Senate is moving toward approving new gun-safety measures in response to those killings.

Stocks tied to weapons and ammunitions manufacturers are typically bought individually because there are few indexes and exchange-traded funds that hold them as a group, and many institutions are restricted from buying them. In most cases, funds that specialize in munitions primarily hold large federal contractors like Northrop Grumman Corp., Lockheed Martin Corp. and Raytheon Technologies Corp.