Tech Earnings Will Continue to Be Attractive: Well Fargo's McMillion

Both companies topped Wall Street predictions with sales and earnings, with Snap even posting a surprise profit -- its first as a publicly held business. That sent shares of Snap rocketing up 47 per cent in premarket trading while Pinterest gained 14 per cent.

Shares of both companies had plunged Thursday after Facebook owner Meta Platforms Inc. reported disappointing earnings. Apple Inc.’s change to its data-collection rules has made it harder for social media networks to sell advertising -- their main source of revenue.

But the latest results suggest that Snap and Pinterest weren’t dealt as hard a blow. In Snap’s case, the company benefited from augmented-reality tools that are attractive to marketers. At Pinterest, Chief Financial Officer Todd Morgenfeld said there hasn’t been a material impact on revenue from Apple’s changes.

But it’s possible that Pinterest could be impacted at some point in the future, Morgenfeld said.

“The changes in the privacy and regulatory environment are generally unhelpful in our ability to deliver performance advertising results,” he said in an interview. “We’re not immune to these issues impacting our business over time.”

For now, the message to investors is clear: Facebook’s problems aren’t everybody’s problems. Pinterest posted adjusted earnings of 49 cents a share, handily beating the average estimate of 42 cents. Revenue also topped predictions at the company, which uses a pinboard interface to provide a visual search service.

It’s been developing AR features for shopping as well, and 2021 marked the company’s first profitable year. 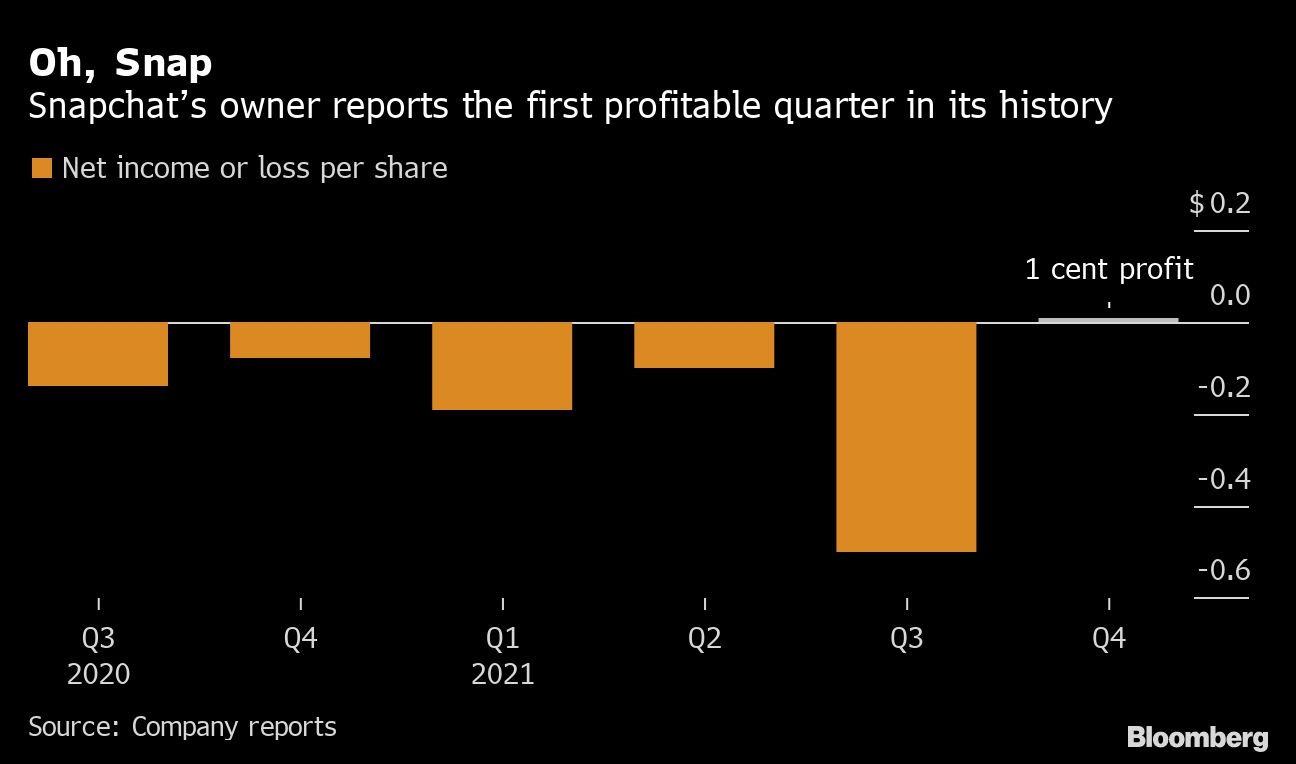 Snap’s fourth-quarter sales increased 42 per cent to US$1.3 billion, compared with an average estimate of US$1.2 billion. Net income amounted to 1 cent a share, compared with projections for a loss of 9 cents.

The company’s Snapchat service, a mobile app for sending disappearing messages and watching videos, had 319 million daily active users in the period. That beat analysts’ expectations for 316 million, according to data compiled by Bloomberg.

More brands are experimenting with AR to offer customizable advertising and shopping experiences -- say, to let consumers try on clothes or beauty products virtually. Snap argues that such innovations will be increasingly attractive to users of its app, which is particularly popular among teenagers and young adults.

Still, the new restrictions on iPhone data collection have been a cloud over Snap. Apple started requiring all apps to get users’ explicit permission to track their activity across the internet -- a request many customers deny. Snap executives previously said its users were opting into tracking more often than some of the industry’s reported averages, but the full effect of the changes was unknown.

Supply chain woes and labor shortages also could hamper growth. Advertisers in the consumer packaged goods and restaurant industries have been affected most severely, according to Snap Chief Business Officer Jeremi Gorman.

She said the company’s sales team worked to help advertisers adjust to Apple’s new privacy restrictions, including by providing their own measurement tools.

“We grew our community, expanded our product offerings and demonstrated the power of our augmented reality platform,” Snap Chief Executive Officer Evan Spiegel said in prepared remarks. “We faced some fresh challenges in 2021, but posted strong results.”