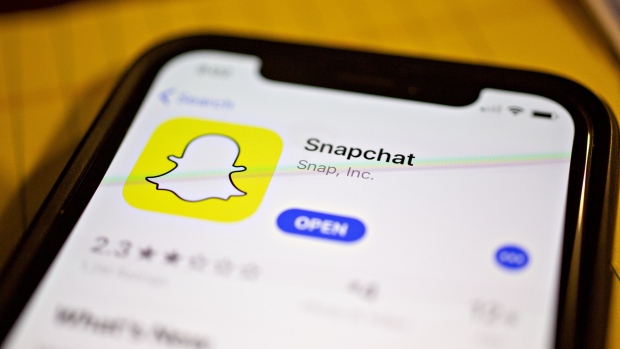 The Snap Inc. Snapchat application is displayed in the App Store on an Apple Inc. iPhone in an arranged photograph taken in Tiskilwa, Illinois, U.S., on Monday, Feb. 4, 2019. , Daniel Acker/Bloomberg

Snap Inc. reported revenue and user growth that beat analysts’ estimates, boosted by an increase in downloads of the revamped Android version of its app around the world.

The company reported 210 million daily active users for its Snapchat application in the three months ended September, beating the 206 million average estimate of analysts surveyed by Bloomberg. Third-quarter sales jumped 50 per cent to US$446 million, compared with US$437.9 million projected by Wall Street.

Snapchat, which lets people send video and photo messages that disappear, seems to have mostly recovered from a rocky performance after its 2017 initial public offering. It has weathered executive departures, user defections and tough competition from Facebook Inc.’s Instagram.

The company has improved Snapchat’s performance, especally on Android phones, and increased the amount of fun, creative tools for its users, causing daily users to open the app 30 times a day on average, according to the company.

Now, advertisers are slowly looking to Snapchat as an alternative to the technology industry’s much larger platforms.

“Google and Facebook dominate mobile advertising, but there is plenty of room for other winners as mobile time spent continues to scale,” said Rich Greenfield, an analyst at Lightshed Partners. “Our conviction in Snapchat’s recovery has grown meaningfully over the course of 2019, as we hear positive first-hand feedback from advertising clients.”

Snap shares fell 6.8 per cent in extended trading after closing down four per cent to US$14. The shares have more than doubled in value so far this year, but aren’t yet past the $17 IPO price.

The company has been working toward reducing expenses. Its net loss narrowed 30 per cent to US$227 million, or 16 cents a share. Analysts had projected US$262.3 million.

Snapchat has become a poster child for Facebook’s competitive hold on the social media market. Facebook and its photo property Instagram have repeatedly copied Snapchat’s best features, cutting into its potential. Now, Facebook is under investigation by the Justice Department and the Federal Trade Commission for antitrust violations. Snapchat’s recovery could weaken the government’s argument.