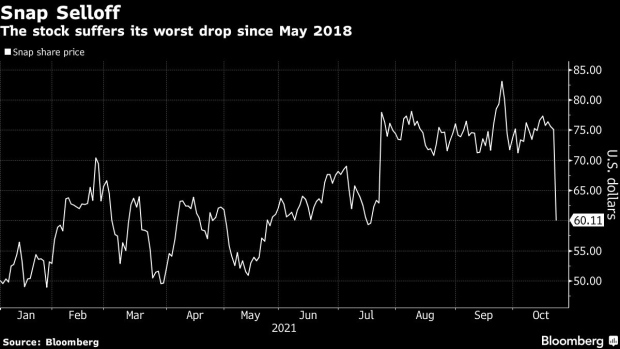 (Bloomberg) -- Snap Inc. plunged the most since May 2018 after the Snapchat parent company warned that Apple Inc.’s data collection rules and global supply-chain bottlenecks are weighing on advertising spending.

The stock dropped as much as 22%, wiping about $25 billion of a market value that now sits around $95 billion. The cautious outlook cast a shadow over other ad-dependent peers, including Google-owner Alphabet Inc., Facebook Inc., Twitter Inc. and Pinterest Inc., which fell between 2% and 4% each.

All together, Snap’s warning erased about $94 billion of market value from the company and peers on Friday.

“Management almost couldn’t have sounded worse around the effects this is having,” Brad Erickson, analyst at RBC Capital Markets, wrote in a note on Snap. Sticking to his outperform rating on the stock, Erickson said the credibility of the company’s leadership may have be permanently damaged, though he remains bullish on long-term growth prospects.

Speaking on a post-earnings call with analysts, Chief Executive Officer Evan Spiegel said data collection rules introduced by Apple have made it difficult for advertisers to measure and manage their ad campaigns. Snap expects adjusted earnings before interest, tax, depreciation and amortization of $135 million to $175 million in the last three months of 2021, much lower than the $299.3 million forecast from Wall Street.

Earlier this year, Apple started requiring all apps on its iOS 15 platform to get iPhone users’ permission to be tracked for advertising purposes. Analysts are warning that the impact could be long lasting, while supply-chain snags at Snap’s advertising partners are most likely to be transitory.

Morgan Stanley’s Brian Nowak said he sees the impact from Apple’s privacy changes hurting Facebook’s revenue by low-to-mid single-digit percentages. He expects Twitter to be weighed down more in the next two years as the changes hurt the micro-blogging company’s “multi-year bull case.” Facebook and Twitter are both due to report quarterly results next week.

Though Snap could face the worst impact among peers from Apple’s changes, JPMorgan analyst Doug Anmuth said Facebook’s profile looks similar. For Google, supply bottlenecks are more of a concern, he said.

Snap said its advertising partners across a variety of industries are facing supply chain disruptions and labor shortages. This is occurring at a time when these partners would normally be operating at peak capacity, generating the strongest and most valuable quarter for ad revenue. But marketers can’t advertise for products they can’t sell.