​Snap Inc. (SNAP.N) soared in pre-market trading Wednesday, one day after the company blew past revenue expectations in its fourth-quarter results. The social-media company, shares of which have languished in a long-term downtrend, also pointed to a stabilizing user base, helping to diminish a primary concern held by investors.

Analysts cheered the results, with Snap getting at least one upgrade and a number of price target increases. However, the analysts said the company continues to face a number of long-term uncertainties surrounding its ability to grow its user base and fend off competition. As RBC Capital Markets wrote, “Things clearly getting less worse, but are they getting better?”

The stock jumped as much as 26 per cent before the bell, implying that it would open at its highest level since September. The stock had lost 49 per cent in the past year through Tuesday. Social network peer Twitter Inc. also gained 1.3 per cent in early trading.

Upgrades the stock to market perform from underperform, citing the stabilizing trends in daily active users (DAUs), and adding that a redesign of its Android app “could drive an improvement in 2019.”

Despite being more positive on the company’s fundamentals, the company’s valuation and “continued competition concerns (e.g., Instagram) limit our enthusiasm.”

“The monetization growth we saw in the quarter was evidence of the platform’s longer-term potential, particularly as the company continued to innovate with, for example, professional content and the Snap Pixel, where purchases more than doubled q/q.”

Lifts price target to US$8 from US$6 “to reflect the stabilization of DAUs, incremental near-term cost efficiencies, and expansion of comp group multiples.” Keeps neutral rating.

“The two most positive pieces of the 4Q story were that the user base stabilized, and the redesigned Android app has been rolled out selectively after a fairly long wait; the company expects a broader rollout to other geographies sooner rather than later.”

Suggests the stock could be in a similar place to Twitter at the beginning of 2017, at the start of a lengthy advance.

“The pieces may be in place,” for a move similar to Twitter’s. “A successful ads platform auction transition, ongoing product innovation (for both advertisers and users), and Android platform improvements rolling out. The key remains reigniting DAU growth.”

“DAU growth and revenue growth acceleration could make us -- and the market -- more constructive.”

Lifts price target to US$10 from US$8 but keeps sector perform rating.

Calls results a “step in the right direction.” Raises price target by US$1 to US$6.

Fourth-quarter users “were better than expected and SNAP is making progress on ads and opex discipline. Looking ahead, a successful Android launch and further ad improvements will be important.”

Price target lifted to US$5.50 from US$5, but underweight rating remains.

“These results are driving near-term appreciation but, in our view, SNAP’s ability to successfully roll out its new Android app throughout 2019 (and meaningfully increase its user base) will be key to driving better user growth, higher earnings power and further multiple expansion.” 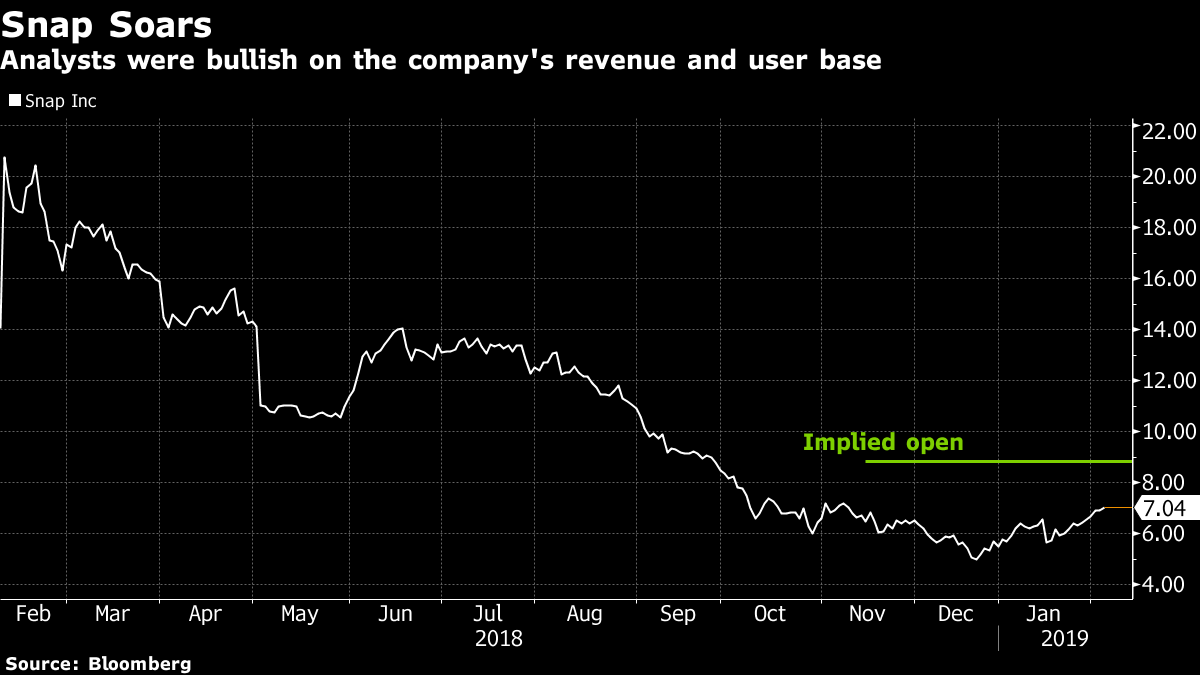