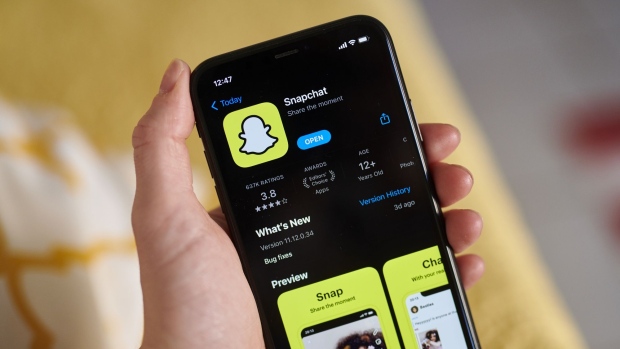 Snap Inc. shares tumbled 28 per cent after the owner of the Snapchat app reported third-quarter sales that fell short of analysts’ estimates, weighed down by Apple Inc.’s new data collection restrictions and their effect on digital advertising measurements.

The company also warned that global supply chain issues are discouraging advertisers from trying to reach new customers, and that this pullback will impact the company’s business in the fourth quarter. Snap estimates fourth-quarter revenue will fall below current Wall Street estimates.

Third-quarter sales increased 57 per cent to US$1.07 billion, the company said Thursday in a statement. That compared with the US$1.1 billion average projection of analysts, according to data compiled by Bloomberg. The ephemeral photo-sharing app Snapchat reported 306 million daily active users in the period, beating predictions of 302 million.

The stock fell to US$54 in extended trading, reflecting investor concerns that Snap’s digital advertising business could suffer further after Apple implemented a software update to limit targeted advertising. Earlier this year, Apple started requiring each app to get iPhone users’ permission to be tracked for advertising purposes. Device holders have opted to give apps the ability to monitor their behavior just 25 per cent of the time, according to an earlier estimate from Branch, which analyzes mobile app growth.

Snap executives have said its users were opting into tracking more often than some of the industry’s reported averages, but they won’t know the full effect of the change until later in the year. In prepared remarks, Snap Chief Executive Officer Evan Spiegel said these changes impacted Snap’s business in June and July.

“While we anticipated some degree of business disruption, the new Apple-provided measurement solution did not scale as we had expected, making it more difficult for our advertising partners to measure and manage their ad campaigns for iOS,” Spiegel plans to say on a call with analysts.

Spiegel also said that some advertisers have pulled back on spending because of global supply chain issues cause by the pandemic. “This in turn reduces their short-term appetite to generate additional customer demand,” Spiegel will say. He calls these disruptions “inherently unpredictable.”

That will impact Snap’s fourth-quarter sales, according to Chief Business Officer Jeremi Gorman. “We expect this to impact advertising demand in Q4 in particular as, in many cases, their businesses do not have the inventory or operational capacity to support incremental demand.”

Snap said fourth-quarter revenue is expected to be US$1.17 billion to US$1.21 billion, or growth of 28 to 32 percent. Analysts’ current revenue estimate for the fourth quarter is US$1.35 billion, according to a Bloomberg survey.