A billboard displays the logo of Snapchat above Times Square in New York March 12, 2015. , REUTERS/Lucas Jackson

Snapchat owner Snap Inc shot the opening salvo in its $3 billion initial public offering on Thursday, outlining aggressive expansion plans but offering new investors no say on how the company is run and no promise of profits.

Snap's publication on Thursday of its IPO registration document sets the stage for its upcoming marketing campaign to convince investors to look past its widening losses and the firm grip of its founders, and focus on its rapid growth of active users.

The number of Snap's daily active users grew to an average of 158 million at the end of December, up 48 per cent year-on-year, Snap revealed. However, its net loss widened to $514.6 million in 2016 from $372.9 million the year before.

While Snap will have time to polish its marketing pitch in the run-up to the IPO planned for March, some analysts were taken aback that the company was just beginning to reap cash from its product.

"What surprises me the most is that it is still very early days when it comes to Snap making money," said Rohit Kulkarni, managing director at private securities investment firm SharesPost.

Snap had confidentially registered with the U.S. Securities and Exchange Commission for an IPO late last year. It kept the filing under such tight wraps, even some of its IPO underwriters had not seen it prior to publication on Thursday, sources familiar with the matter previously told Reuters. 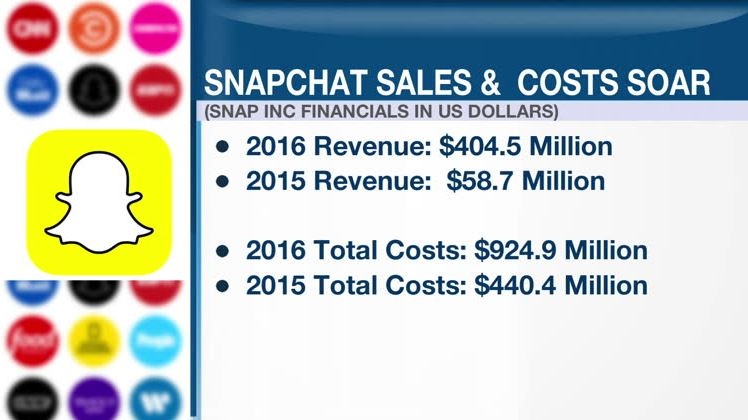 Snap said in the IPO registration document published on Thursday it would become the first U.S. company to go public with shares on offer not granting voting rights to stock market investors. Its founders, Evan Spiegel and Robert Murphy, will keep control of the company.

Snap could be valued at between $20 billion to $25 billion, according to sources familiar with the situation who asked not to be named because the matter is confidential. That would give the company the richest valuation in a U.S. technology IPO since Facebook Inc.

Snap, which launched itself in 2012 with an app that sends disappearing messages, rebranded itself last year as a camera company and started selling $130 video camera glasses. It generates the majority of its revenue from advertising, seeking to challenge the dominance of internet giants such as Facebook and Alphabet Inc's Google.

"The industry has been crying out for new advertising units" says Ian Schafer, founder and chairman of ad agency Deep Focus, referring to the tight hold Facebook and Google have on the digital advertising marketplace.

Snap said it couldn't predict if the structure would "result in a lower trading price or greater fluctuations" in the stock.

Keeping tight control is common in companies closely associated with their founders, who often prefer to grow their business without being questioned by a broad array of investors. Still, offering a class of stock with no votes in an IPO is unprecedented.

Though the structure has drawn some criticism for not giving stock market investors the opportunity to have input, some people close to the company have argued that investors can "vote with their feet" by not buying into the IPO if they are not comfortable with the arrangements.

"Investors have to decide, am I going to avail myself of the opportunity to buy the stock, and forget about the fact that somewhere down the road they are likely going to run into trouble?" said James McRitchie, an independent corporate governance activist who has pressed for more equal voting rights at companies including Facebook.

Snap's biggest losses stem from "hosting fees" which it pays to cloud computing companies such as Google to use their infrastructure for its data. It will pay Google $2 billion over the next five years to use its cloud computing services.

Because Snapchat users rely heavily on data-heavy pictures and video, the cost of these service is high. Still, the proportion of the company's costs to its revenue has been declining. Its strategy has been to bargain for better hosting rates as its growing number of users buoys its negotiating leverage.

"They are adding infrastructure ahead of growth, and that is why you have some front-loading of losses," said SharesPost's Kulkarni.

Some companies such as Facebook have their own hosting platforms, though this model can be more costly.

Snap's aggressive expansion is reflected in its staff numbers. By the end of last year, it had increased its number of employees to 1,859 from 600 in 2015.

Snap said it would use the proceeds from its IPO for general purposes, including working capital, operating expenses and capital expenditures.