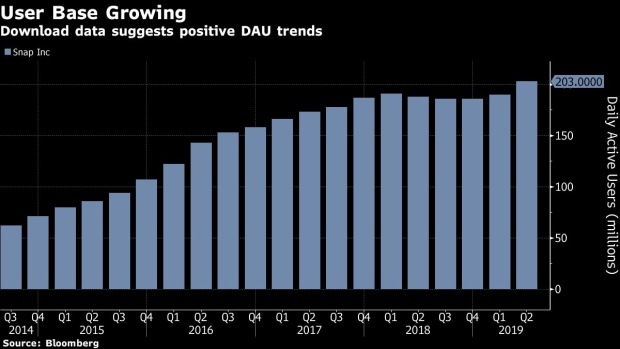 The Snap Inc. Snapchat application is displayed in the App Store on an Apple Inc. iPhone in an arranged photograph taken in Tiskilwa, Illinois, U.S., on Monday, Feb. 4, 2019. Snap Inc. is scheduled to release earnings figures on February 5. Photographer: Daniel Acker/Bloomberg , Bloomberg

(Bloomberg) -- Snap Inc. should continue to see growth in the critical metric of daily active users, according to analysts who analyzed the latest data on downloads for the social-media company’s Snapchat app. The data helps to support the thesis that a recent uptrend in user engagement could be lasting.

Guggenheim wrote that SimilarWeb’s August data showed “relatively stronger DAU growth” for Snapchat compared with other social-media sites. Snapchat’s quarter-to-date growth of 3.2% among Android users outpaced Pinterest’s 2% growth, as well as the 0.5% increase seen at both Facebook and Instagram, according to the Wall Street firm, which has a neutral rating on Snap. Both Facebook and Instagram -- which is also owned by Facebook Inc. -- have much larger user bases than Snapchat.

Citi analyst Hao Yan wrote that while the correlation of downloads to daily active user growth “is yet to be perfect,” there are “strong upward trends” in download activities thus far this year. This “corresponds to the positive SNAP DAU recovery in recent quarters.” The firm has a neutral rating and $18 price target on Snap.

While the SimilarWeb data is limited to Android phones, Citi said that if July and August’s activity trends continue in September, “the downside risk on 3Q DAU outlook could be more limited vs what was suggested by the recent market reaction.”

Earlier this week, Bank of America estimated that app downloads thus far in the third quarter were up 23% on a year-over-year basis, a reflection of the recent viral success of Snapchat’s “face swap” photo filters. However, they were down 18% from the second quarter, underlining fears that the jump in popularity was temporary, and that stock gains were overdone.

Those comments from BofA contributed to a two-day drop of nearly 10% in Snap’s shares. Snap rose 1.2% as of 12:03 p.m. Wednesday in New York. The stock has tripled from a December low.