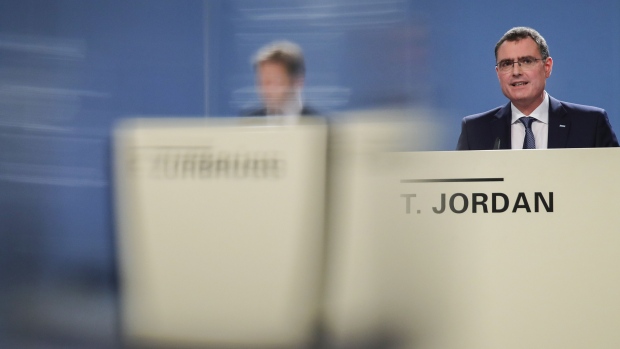 Thomas Jordan, president of the Swiss National Bank (SNB), speaks during the bank's rate announcement news conference in Bern, Switzerland, on Thursday, June 17, 2021. The Swiss National Bank kept up its ultra-expansive monetary-policy stance aimed at thwarting any appreciation of the franc and insisted that any nascent inflation pressures it’s seeing won’t endure. , Bloomberg

Although inflation in Switzerland is lower than elsewhere, “in this country, too, it has still increased much more than was generally expected”, Jordan said at the University of Lucerne on Friday, speaking alongside Bundesbank chief Joachim Nagel. “It cannot be ruled out that further increases in the SNB policy rate will be necessary to ensure price stability over the medium term.”

The SNB raised borrowing costs by 75 basis points to 0.5% on Thursday, ending the era of negative rates in Europe as the last central bank on the continent. While the size of the hike was predicted by economists, the Swiss franc plummeted, suggesting markets had expected a bigger move.

Swiss inflation rose to 3.5% in August. That’s about a third of the pace in the surrounding euro area, but still the highest value recorded in Switzerland since 1991.

“There are growing signs that higher prices are increasingly spreading to goods and services that are not directly affected by the war in Ukraine or the consequences of the pandemic,” Jordan said, warning of the heightened risk of second-round effects.

SNB’s governing board is set to meet on Dec.  15 for its next policy decision. However, “if our inflation outlook would completely change,” the central bank could also move between scheduled meetings, Jordan told Bloomberg Television on Thursday.