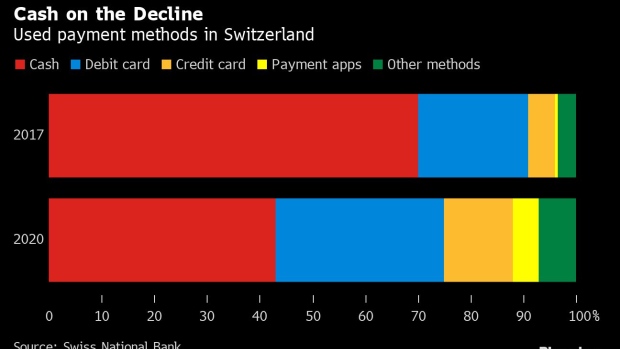 The cross of the Swiss national flag sits on Swiss franc banknotes in an arranged photograph in Bern, Switzerland, on Saturday, March 14, 2020. Pressure is intensifying on the Swiss National Bank to join policy makers around the world who’ve cut interest rates and increased stimulus in response to the coronavirus outbreak. , Bloomberg

(Bloomberg) -- Switzerland needs to ensure a well-functioning infrastructure for ATMs to ensure the declining use of bills and coins doesn’t become self-reinforcing, according to a central-bank official.

“Cash is a well-functioning system, but it is not to be taken for granted,” Swiss National Bank Vice President Martin Schlegel said on Tuesday. “We do also see risks in a strong shift towards cashless payment methods. Declining cash usage puts economic pressure on the cash infrastructure.”

The SNB is monitoring access and acceptance of different consumer payment methods because ensuring the supply and distribution of physical money via is one of its key tasks, Schlegel said. He spoke at a conference in Liechtenstein, which has used the Swiss franc for the past century.

“A strong reduction in withdrawal facilities would presumably result in people taking out less cash – and consequently using it less,” he said. “A reduction in access and declining acceptance could therefore start a downward spiral, with more restricted access, less use and more limited acceptance mutually reinforcing each other.”

Schlegel cited SNB data showing that cash use dropped from 70% of all transactions in 2017 to only 43% in 2020, when the pandemic may have discouraged its use.

Young Swiss now only settle roughly 30% of their transactions with bills and coins, while using debit cards for about 40%. People aged 55 and over use cash only for little more than half their payments.