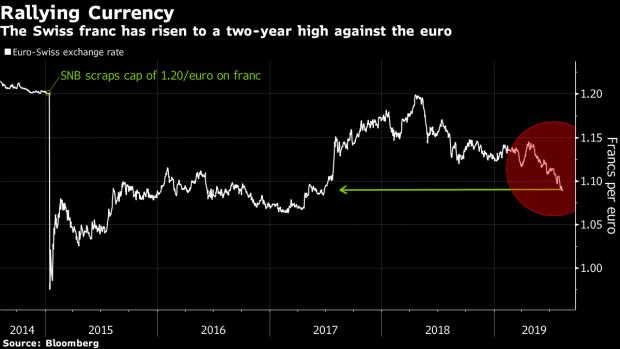 A Swiss national flag hangs in view of the Swiss National Bank (SNB) in Bern, Switzerland, on Friday, April 26, 2019. The Swiss National Bank is in no position to raise interest rates given markets are still in a "fragile" state, according to President Thomas Jordan. Photographer: Stefan Wermuth/Bloomberg , Bloomberg

The Swiss National Bank may have to step up measures to tame the franc and prevent the currency from appreciating to a damaging level.

A rising number of economists expect the SNB to reduce its benchmark interest rate, already the world’s lowest at -0.75%. Data from the central bank suggest it’s recently been intervening after the currency appreciated to the highest since 2017.

UBS Group AG, Raiffeisen Schweiz and Bank J. Safra Sarasin are among the institutions now expecting a rate cut of up to 25 basis points by the end of September, according to a survey conducted by Bloomberg. That’s up from a single forecast the previous month.

With the franc up more than 4% versus the euro in the past three months and the European Central Bank expected to unleash new stimulus, the SNB is under close scrutiny for possible action it will take to contain the currency’s strength.

SNB President Thomas Jordan has said there’s still room to maneuver both on interventions and interest rates should the economy deteriorate. He’s previously shown a willingness to take dramatic action when needed, and traders will need little to remind them of his market-shaking decision in 2015 to remove a franc cap.

Despite the increase in participants expecting an SNB cut, the median forecast in the survey of 17 analysts for the key rate to remain at -0.75%.

To contact the reporters on this story: Catherine Bosley in Zurich at cbosley1@bloomberg.net;Harumi Ichikura in London at hichikura@bloomberg.net