What's next for SNC-Lavalin

Share of SNC-Lavalin Group Inc. surged after settling a fraud charge related to bribes it paid in Libya a decade ago, lifting a legal cloud that had engulfed Canada’s largest engineering and construction company.

SNC-Lavalin Construction, a unit of the Montreal-based firm, pleaded guilty to fraud and agreed to pay a $280 million fine over five years, while accepting a three-year probation order. Charges against the parent SNC and its international marketing arm were dropped.

The settlement and related fines were much less severe than many analysts expected, bringing an end to a legal saga that’s been hanging over the company for years and even touched the government of Prime Minister Justin Trudeau. The legal troubles added to three profit warnings, a writedown on its Middle East energy business and the loss of a contract in Chile, pushing the stock down by almost half this year before the surge Wednesday.

“This is a game-changer for the company and finally allows us to put this issue behind us,” Ian Edwards, chief executive officer of SNC, said in a statement. “I apologize for this past misconduct and welcome the opportunity to move forward.”

SNC shares closed up 19 per cent to $28.70 in Toronto, the best gain since October but tempering an intraday rally. The stock is down 38 per cent this year. 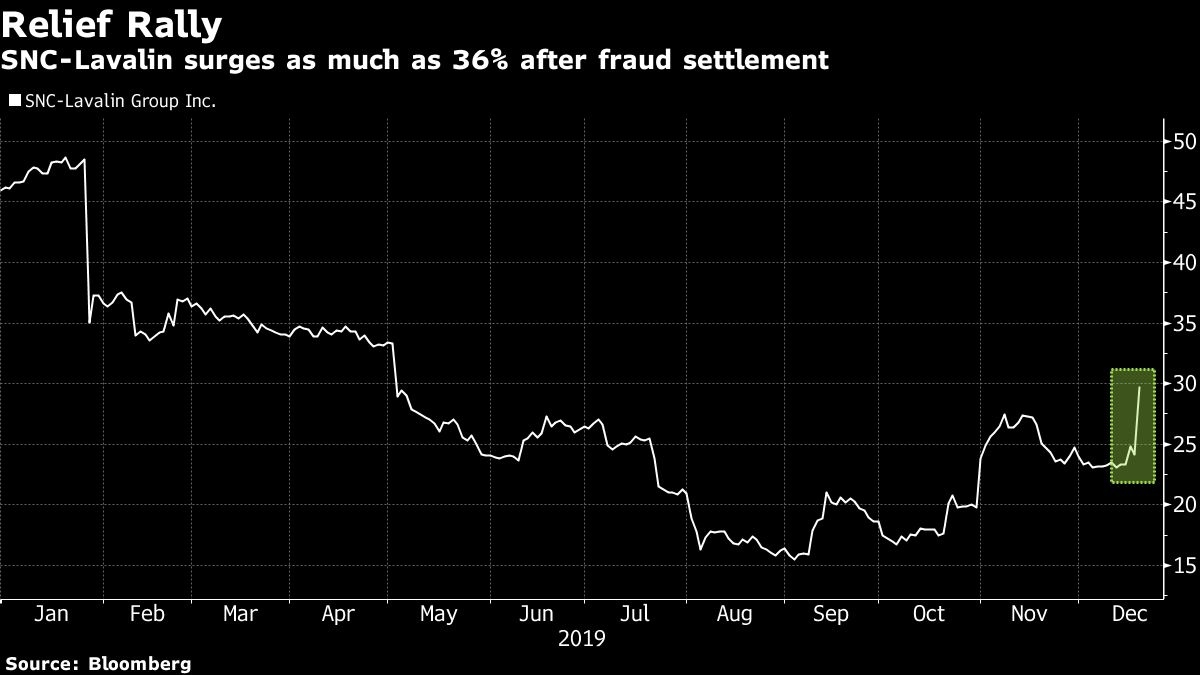 The company said it doesn’t expect the guilty plea by its construction subsidiary will affect the eligibility of SNC-Lavalin to bid on future projects, given its reduced focus on that sector. SNC hasn’t bid on a construction contract since it was first charged in 2015, it said.

SNC is “no longer a pariah investment thesis,” Maxim Sytchev, an analyst at National Bank Financial said in a note to clients. Analysts had been expecting a $300 million fine, and the overall punishment was far less damaging than it could have been. “While the trading multiple may not converge right away, we do expect the corruption ‘discount’ to dissipate over time.”

He has an outperform rating on the stock, the equivalent of a buy, and a $37.50 price target.

I have long believed in the essential necessity of our judicial system operating as it should—based on the rule of law and prosecutorial independence, and without political interference or pressure. (1/3)

Ultimately, that system was able to do its work—as democracy and good governance requires—and an outcome was reached today. Accountability was achieved. (2/3)

2019 began with very public questions about the rule of law in our country. I am glad to see it end with that principle being upheld. The justice system did its work. It is time to move forward and for the company to look to its future. (3/3)

Prosecutor Richard Roy told reporters at the Montreal court that the fine was appropriate, reflecting the company’s guilty plea, and the overhaul of management since 2012.

SNC’s troubles had political implications after Canada’s ethics commissioner ruled in August that Trudeau inappropriately interfered on SNC’s behalf, pressuring his former attorney general to help the company settle the charges out of court.

The government had an option to issue a so-called deferred prosecution agreement that would shield the firm from a potential conviction and subsequent ban on federal government contracts. Former justice minister Jody Wilson-Raybould refused to issue the agreement, leading to a fall out with the prime minister.

In the end, the company decided to face its day in court. Former SNC executive Sami Bebawi was found guilty earlier this week in a separate case of paying off foreign officials as he worked to secure contracts for the firm in Libya.