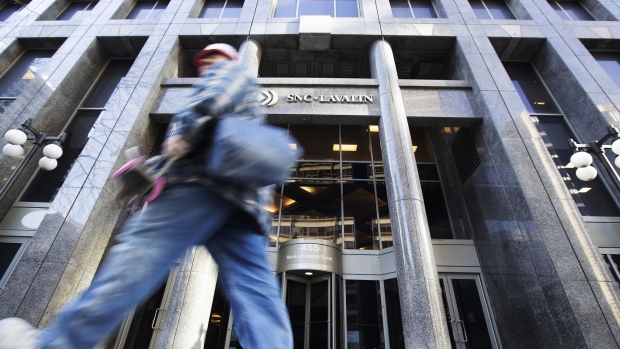 A pedestrian passes in front of the SNC-Lavalin Group Inc. headquarters in Montreal, Quebec, Canada, on Monday, Feb. 11, 2019. , Christinne Muschi/Bloomberg

MONTREAL -- SNC-Lavalin Group Inc. will be free to pull up stakes from Montreal — the seat of its operations for more than a century — come 2024, along the lines of a "Plan B" it submitted to federal prosecutors in 2018.

Shareholders voted Thursday to maintain a bylaw provision that allows the engineering firm to move to another province. The company is tethered to Montreal for the next four years through the strings attached to a $1.5-billion loan from Quebec's pension fund manager that allowed SNC to acquire British competitor WS Atkins in 2017.

When that loan is repaid, the terms expire, unmooring the company.

Underscoring SNC's open horizon was the rejection by shareholders of a proposal from Montreal-based investor rights group MEDAC at the company's annual general meeting Thursday.

MEDAC asked the board to commit to preserving SNC's head office in Quebec after senior management "informed the federal government that it was seriously considering moving the head office from Montreal to the U.K. if they did not agree to settle, out of court, the corruption charges filed against the company."

The board recommended shareholders vote against the proposal, highlighting its commitment to Canada's second-largest city through 2024. "(W)e are deeply committed to remain a Montreal-based global Canadian company with our head office in Quebec," SNC states in its proxy circular.

Last December, SNC-Lavalin settled criminal charges related to business dealings in Libya, with its construction division pleading guilty to a single count of fraud that helped tie off a long-standing scandal that tarnished its reputation and ensnared the highest office of the Canadian government.

SNC had warned Ottawa in September 2018 about a possible plan to split the company in two, move its offices to the United States and eliminate its Canadian workforce if it didn't get a deal to avoid criminal prosecution, according to documents obtained by The Canadian Press last year.

The PowerPoint presentation documents describe a "Plan B" outlining how SNC might have to move its Montreal headquarters and corporate offices in Ontario and Quebec to the U.S. within a year, cutting its workforce to just 3,500 from 8,700 before eventually winding up its Canadian operations.

"We don't understand why the company's commitment to maintain its headquarters in Montreal is part of an agreement with a major investor," MEDAC said at the online AGM, referring to the Caisse de depot et placement. "Would SNC have wanted to leave otherwise? This seems totally inconceivable to us."

CEO Ian Edwards and chairman Kevin Lynch, who plans to step down shortly, did not comment on the MEDAC proposal during the meeting.

"We have indicated on numerous occasions that we are focused on implementing our new strategic direction, and thereby building a world-class engineering services company headquartered in Montreal," SNC said in an email to The Canadian Press.

Amendments to the company bylaw on the location of its headquarters are what prompted the vote, and were "essentially modifications to allow for a virtual general meeting," SNC said.

In financial results released Thursday, SNC-Lavalin saw its first-quarter loss deepen compared with a year ago as it took a charge due to lower expected payments related to its sale in the Ontario's Highway 407 toll road.

The company said it lost $66 million or 38 cents per share for the quarter ended March 31, including a $57.2-million charge related to the fair value revaluation of contingent payments related to the sale of a large part of its stake in the Ontario Highway 407 toll road.

The result amounted to a 282 per cent drop from a loss of $17.3 million or 10 cents per share in the same quarter last year.

Revenue for the quarter totalled nearly $2.23 billion, down from $2.36 billion a year ago.

The adjusted loss from its professional services and project management operations amounted to $3.9 million or two cents per diluted share, compared with an adjusted net loss of $14.9 million or eight cents per share a year earlier.

--With files from Julien Arsenault