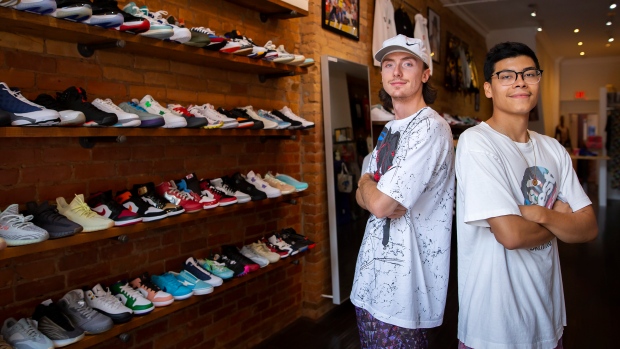 Omnes co-owners Steven Olds, left, and Mario Ruiz in their sneaker store in Hamilton, Ont. on Saturday, July 25, 2020. To the dismay of his parents, Mario Ruiz quit a lucrative job to open a small retail store in Hamilton, before he and partner Steven Olds moved Omnes to larger digs in the city's downtown. He now has his sights on opening a second location in the city west of Toronto and a store in Western Canada. The Canadian Press/Aaron Lynett

TORONTO -- Mario Ruiz started collecting vintage clothing and hard-to-find shoes in Grade 7 before hawking his wares from his high school locker at a profit.

The 22-year-old co-owner of Hamilton-based resale store Omnes recalls waiting 32 hours in line to buy a shoe at retail, and said one of his best opportunities came when he won a raffle allowing him to purchase a new release of Jordan's Travis Scott shoe for $255.

While many shoe aficionados, known as “sneakerheads,” are drawn to his shop by their passion for rare footwear, a growing number of people are looking to get a piece of the profits from the lucrative kicks, the most coveted of which can sell for tens of thousands of dollars.

“They see some of these shoes are better than stocks,” he said.

The sneaker subculture's origins date back to the 1970s but got a boost in 1984, when NBA star Michael Jordan signed an endorsement deal with Nike. The buzz surrounding the release of each new model of the iconic Air Jordan gave collectors all the reason they needed to seek out the shoes, said Elizabeth Semmelhack, senior curator at the Bata Shoe Museum and author of Out of the Box: the Rise of Sneaker Culture.

She launched a touring exhibit of sneakers starting in Toronto in 2013 that attracted more than 500,000 visitors, largely young men — a demographic seldom seen in a shoe museum.

“I have never experienced such an engaged and enthusiastic set of museum visitors,” said Semmelhack, whose latest book examines the growing collaborations between sneakers and celebrities.

Sneaker collecting has largely replaced stamps and coins for today's youth, but it fills a similar niche as those popular historical pastimes.

“Serious collections require the same kind of focus or connoisseurship that any other type of collecting includes,” she said.

Ruiz says the business has evolved significantly since he began collecting.

Collaborations with fashion houses like Dior and Louis Vuitton have attracted well-heeled followers but its roots remain tightly linked to hip hop and basketball.

Music stars with massive followings, such as Travis Scott and Kanye West, have worked with manufacturers to launch shoes that have become top sellers.

“It's an addiction,” says Shahin Shamshiri, co-owner Toronto consignment store OD. He said he used to collect all kinds of things as a kid, “and there's a monetary value that's hard to ignore on sneakers that everyone knows about.”

Shamshiri said the market for sneakers has become saturated, with cheap buys hard to find, but that there's money to be made for those with business savvy and a love for the sneaker culture.

Like other collector cultures, the scene has its high rollers who are willing to spend eye-watering sums in order to obtain the rarest of items.

Shamshiri's most expensive sale was a self-lacing Nike shoe from the Back to the Future movies that sold for $70,000 to a political leader from Morocco.

Canadian entrepreneur Miles Nadal made headlines last year when he paid more than $1 million for 99 pairs of sneakers at auction, plus $577,000 for a rare pair of 1972 Nike Waffle “Moon Shoes”.

That's far out of the reach of most collectors, particularly the young followers whom Shamshiri says keep the sneaker culture alive and give it its pulse.

They scour YouTube for shows that follow celebrities who drop thousands of dollars on shoes that are stored in boxes and may never touch pavement.

The growth of sneaker culture has mirrored hip hop culture by becoming more mainstream and popular in areas outside of Black communities, urban areas and sports, where it originated and was celebrated, said expert Jemayne Lavar King, who teaches a course on the subject at Johnson C. Smith University in Charlotte, N.C., and is the author of the book “Sole Food: Digestible Sneaker Culture.”

“The interest in sneaker culture is because it is associated with coolness,” he said in an interview.

Those who hold true to the precepts of the hip hop culture — people he describes as authentic subscribers — go to great lengths to keep their shoes like a white leather sneaker looking crisp rather than wrinkled, dingy and with laces tied very tightly.

“No self-respecting subscriber would wear this shoe in this condition, so yeah it's become watered down,” King said.

Meredydd Hardie, a Toronto-based sneaker blogger, is one of those followers who is passionate about sneakers and doesn't talk or care about the money.

“Finding special things and then getting them and getting to wear them — that experience is kind of addictive,” said Hardie, who is in her late 30s.

“The most valuable shoe to me is the one I love most but I don't want to put a dollar amount on it because I think that is not the way I want to think about my collection.”

She compares sneaker collecting to art, and unlike stamp or coin collecting it's closely tied to popular cultural interests like music, basketball, movies and television.

“I bet you kids who collect (today) have never sent a letter so why would it ever occur to them to collect a stamp? And they probably don't use money that much.”