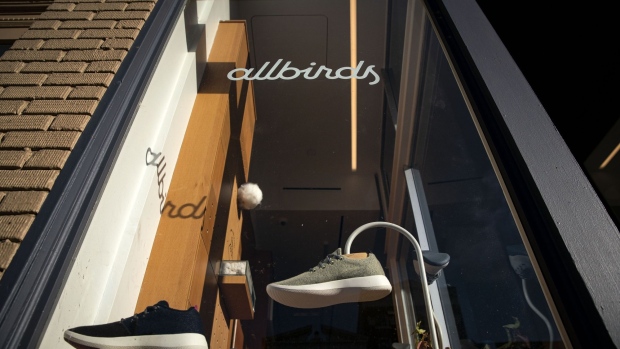 Sneakers displayed at an Allbirds store in the Georgetown neighborhood of Washington, D.C., U.S., on Wednesday, Feb. 17, 2021. Allbirds Inc., branding itself as an eco-friendly company that makes the "world’s most comfortable shoes," last September raised $100 million in a Series E round from large investment firms like T. Rowe Price and Franklin Templeton. , Bloomberg

Allbirds Inc. is moving ahead with an initial public offering as it expands beyond the wool trainers that have become the unofficial footwear of Silicon Valley.

The direct-to-consumer shoe brand listed the size of the offering as US$100 million, a placeholder that will change when terms of the share sale are set. The company was seeking to be valued at US$2 billion or more in a listing, Bloomberg News reported in June.

In its filing Tuesday with the U.S. Securities and Exchange Commission, Allbirds said its net revenue for the six months ended June 30 rose 27 per cent year-over-year to US$118 million. In the same period, its net loss widened to US$21 million from US$9.5 million.

San Francisco-based Allbirds is following the playbook of other DTC brands that have broadened their audience by moving from digital marketing and e-commerce into brick-and-mortar and traditional advertising.

Its pitch to shoe-buyers emphasizes the sustainable, natural materials used in its footwear, including eucalyptus fiber, castor bean oil and crab shells as well as wool.

The shoe maker is a B-Corp, which means its board is legally bound to balance profit and purpose and publicly share an impact report on how it’s improving society or the environment.

It laid out in Tuesday’s prospectus 19 criteria under six categories of how to make an equity offering sustainable and pledged to follow them.

Some of the criteria include disclosing a review at IPO while other efforts have to be reported annually, such as work on establishing a human rights policy, commitment to employee diversity and requiring suppliers to address environmental issues.

Sneakers displayed at an Allbirds store in the Georgetown neighborhood of Washington, D.C., U.S., on Wednesday, Feb. 17, 2021. Allbirds Inc., branding itself as an eco-friendly company that makes the "world’s most comfortable shoes," last September raised US$100 million in a Series E round from large investment firms like T. Rowe Price and Franklin Templeton.

Allbirds also said that investors’ ESG profiles contribute to the selection on which funds get allocated shares in the IPO process.

While sustainability has been trending in the equity capital markets, disclosing these requirements in a legally binding document adds legitimacy to these pledges.

That aside, the words “sustainable,” “sustainably” and “sustainability” appeared more than 200 times throughout the over 200-page document.

It’s not the only footwear maker trying to go public. On Holding AG, maker of the high-end On Running sport shoes brand backed by tennis star Roger Federer, also has filed for a U.S. IPO. The company is eying a US$6 billion to US$8 billion valuation, German language publication Bilanz reported, citing unidentified people familiar with the matter.

Allbirds raised US$100 million in a Series E round in September from large investment firms such as Franklin Templeton and T. Rowe Price. According to data provider PitchBook, the company’s value edged down to an estimated US$1.7 billion from US$1.73 billion in January 2020.

The offering is being led by Morgan Stanley, JPMorgan Chase & Co. and Bank of America Corp. Allbirds plans for its shares to trade on the Nasdaq under the symbol BIRD.