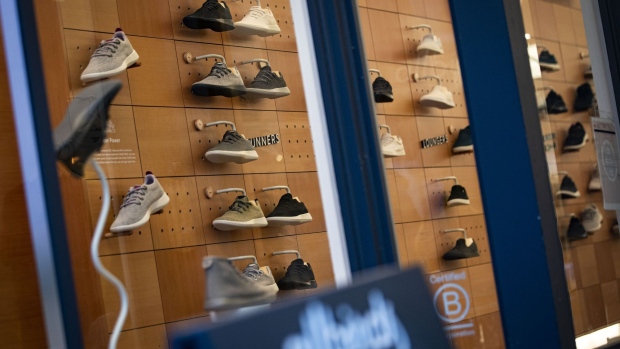 A shopper carries an Allbirds Inc. retail bag while walking in the SoHo neighborhood of New York. , Photographer: Gabby Jones/Bloomberg

Shoemaker Allbirds Inc. and its existing shareholders are seeking to raise up to US$269 million in an initial public offering, adding to a fast-paced season for consumer-oriented listings in the U.S.

The San Francisco-based company is marketing 15.4 million shares for US$12 to US$14 each, according to its filing Monday with the U.S. Securities and Exchange Commission. Existing backers are selling an additional 3.85 million shares in the listing.

At the top of that range, Allbirds would have a market value of US$2 billion based on the outstanding shares listed in its filing. Accounting for employee stock options and restricted stock units, the company would have a fully diluted value of US$2.2 billion.

That’s up from a funding round last year that valued it at US$1.7 billion, according to data provider PitchBook.

The company is joining several other high-profile consumer names in going public. It comes a month after the IPO of On Holding AG, the maker of high-performance shoes backed by tennis star Roger Federer.

Allbirds has been expanding beyond the wool trainers favored by environmentally minded shoppers to include apparel. The direct-to-consumer brand’s net revenue for the six months ended June 30 rose 27 per cent year-over-year to US$118 million. In the same period, its net loss widened to US$21 million from US$9.5 million.

The company’s pitch to shoe-buyers emphasizes the sustainable, natural materials used in its footwear, including eucalyptus fiber, castor bean oil and crab shells, as well as wool.

The Allbirds offering is being led by Morgan Stanley, JPMorgan Chase & Co. and Bank of America Corp. Allbirds plans for its shares to trade on the Nasdaq under the symbol BIRD.