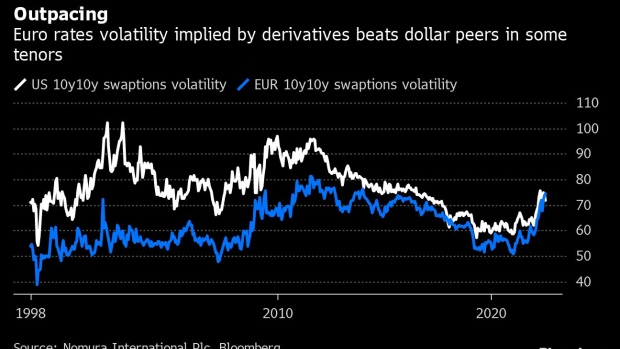 (Bloomberg) -- One of the sleepiest debt markets in the world has woken up, ripping up the playbook for traders and companies alike.

Europe’s bond investors, caught between a central bank raising rates for the first time since 2011 and the prospect of a recession are braving some of the wildest swings on record by some metrics. The yield on Germany’s benchmark bond has oscillated 10 basis points on almost 80 days this year -- something that happened only once in 2021. Hedging costs across euro rates markets have soared.

It’s a regime change for traders numbed by years of easy money and central bank bond buying that’s kept the market subdued. They’re in the dark after European Central Bank officials said they would no longer give a steer on upcoming policy decisions. That’s left the market at the mercy of economic data and Russia’s threat to further curb gas supplies, which would stoke inflation already running at a record pace.

“Rates volatility has seen an explosion in activity,” said Phillip Pearce, an associate at Validus Risk Management. “Without any firm guidance, the market is free to price in whatever the data warrants.”

The fallout is palpable. Investors say it’s becoming more difficult to execute orders in some corners of the market. European companies are reluctant to issue debt or buy prohibitively-expensive protection against price swings. While volatile conditions are what traders usually dream of, some market players are hesitating to take on larger positions, creating a self-amplifying cycle of deeper swings as liquidity dries up.

Of course, European markets aren’t the only ones being tossed around. Volatility in Treasuries has crushed liquidity, and with the Fed now taking an explicitly data-driven approach to policy, it could be setting the market up for shocks. The Bank of England said last week that monetary policy would not be on a “pre-set path,” opening the door for further upheaval.

But for Europe’s safest assets to experience this kind of turbulence is deeply unusual. And it lays bare the challenges the ECB faces as it weans a region off the promise of cheap money in the midst of a full-blown energy crisis.

Since April, the German two-year yield has ended the day 20 basis points lower three times and 20 basis points higher once. Bonds were buffeted on the one hand by data that showed the economy was in a weaker state than expected, and by hawkish messaging from officials on the other.

Moves of that size haven’t been seen since the depths of the eurozone crisis in 2011.

The convulsions have spurred institutions to seek protection in derivatives markets, driving up the cost of hedging via so-called swaptions, which give buyers the right to enter into an interest-rate swap agreement. Demand has been particularly acute in shorter-dated expiries.

Ahead of the ECB meeting last month, the implied volatility on the three-month, two-year tenor peaked at the highest in data going back to 2011. Making matters worse, players who would normally take the other side of the trades started to disappear, according to Pascal Amiel, co-head of fixed-income and currency markets at Natixis CIB.

“The products where investors are selling volatility and which could have restored some balance to the market -- we don’t have them,” said Amiel.

The real step change for markets came in the final months of 2021, as it dawned on ECB policy makers that surging inflation would last longer than anticipated.

The realization that the ECB’s long-held mantra of interest rates being “low for long” was no longer viable caught a lot of dealers and investors on the backfoot, according to Anthony Morris, head of quantitative strategies at Nomura International Plc.

“A lot of dealers seemed to withdraw from the market for a while, which was unusual,” he said. “The interdealer broker market in swaptions, which is normally quite active, dried up.”

Now, 10 months on, inflation is still surprising to the upside. With political turmoil brewing in Italy and European nations racing to prepare for potential gas shortages this winter, further turbulence seems likely.

Against this backdrop, European debt-raising has been quiet. Sales across the region’s primary debt market are running more than 20% behind last year, while just a handful of non-financial companies are raising new debt. Investors are sitting on the sidelines.

Nick Sanders, a portfolio manager at AllianceBernstein, said he struggled to sell exposure even in more-liquid markets such as Italy, with brokers now only willing to accommodate smaller chunks. That’s been worsened during the summer months that typically see thinner flows, he added.

“Liquidity is not what it has been,” he said, pointing to the end of the ECB’s quantitative easing and the fact that banks are generally less willing to take on the same amount of risk. “You don’t want to be holding onto a trade until the last five basis points, you’d rather be getting out of it and taking profits.”

But for those with the balance sheet and the stomach to ride the turbulence, taking that risk is paying off. European banks including Deutsche Bank AG and BNP Paribas SA reported higher trading revenue in the second quarter from global markets as a result of the volatility.

The extra volatility, while hard to navigate, has also put to rest concerns that Europe’s bond markets are entering a prolonged period of malaise, akin to the debt doldrums that have afflicted Japan. There, the central bank owns about half the outstanding government bonds and entire days go by when no benchmark securities are traded.

“The good news from a market-making perspective is that we can expect more interest in euro rates,” said Nomura’s Morris, adding that a lot of investors had tended to ignore European markets. “The euro market has been a snooze-fest for the last 10 years or so -- it’s been like Japan-lite.”

Whether that shift is permanent ultimately depends on the outlook for inflation.

The prospect of a recession in the euro-zone could see implied volatility slump, as rates move lower and the path of future hikes becomes more certain, according to ING strategist Antoine Bouvet.

Commerzbank AG warned last week that if Russia shuts off gas supplies it would trigger a slump in Germany on a par with the contraction witnessed in the 2008 financial crisis. The lender, which caters to the nation’s small and medium-sized companies, is seen as a bellwether for the Germany economy.

“We have shifted to a regime of higher rates volatility,” said Adam Kurpiel, interest-rate strategist at Societe Generale SA. “All of these uncertainties are not going to dissipate quickly.”