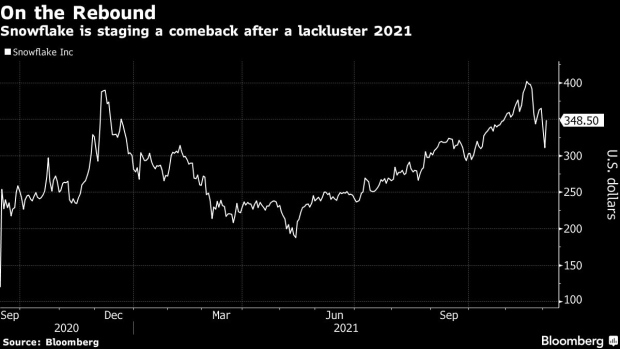 (Bloomberg) -- After nearly a year of mediocrity, Snowflake Inc. is acting more like the company that ranked among the best stock debuts of 2020.

The software developer posted quarterly results that largely topped analysts’ estimates, and it provided a stronger-than-expected outlook for the fiscal year. The report sent the stock up as much as 14% on Thursday, the biggest advance in almost a year and more than doubling Snowflake’s gain for 2021.

If it holds, the advance would restore some of the luster that’s been missing since Snowflake’s standout public offering in 2020, when it soared 135% from the start of trading in September through the end of the year. The stock has struggled this year, up just 11% through Wednesday’s close and way below the 20% gain in the S&P 500 Index.

Wall Street has questioned the stock’s high valuation -- it trades around 90 times revenue by some measures -- but Citigroup Inc. turned bullish on Snowflake after dissecting the fiscal third-quarter results. Analyst Tyler Radke upgraded the stock to buy from neutral, noting that Snowflake reported the largest product revenue beat-and-raise since its IPO and that it hit his target for profitability far ahead of schedule.

Thursday’s rally continues Snowflake’s streak of positive post-earnings reactions. The stock has gained in each session after releasing results since the company’s first public report in December 2020, according to data compiled by Bloomberg.