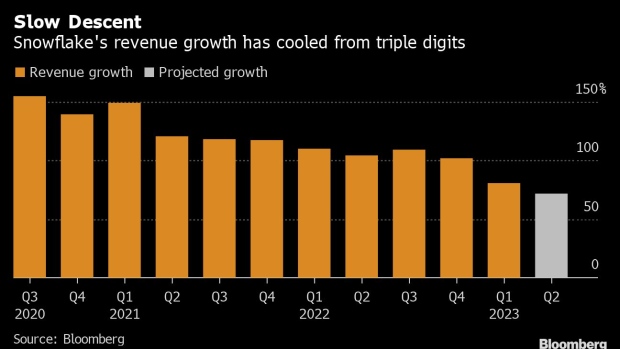 (Bloomberg) -- Snowflake Inc., a software company that helps businesses organize data in the cloud, dropped in extended trading after giving a sales forecast that signaled slower growth for the second consecutive quarter amid concerns about the pace of corporate spending on information technology.

Product revenue is projected to be $435 million to $440 million in the current period, which ends in July, the company said Wednesday in a statement. That would mean growth of 71% to 73% compared with a year earlier -- the slowest since Snowflake became a public company in 2020. Product sales make up more than 90% of Snowflake’s total revenue and are watched closely by investors and analysts.

Snowflake came to prominence with one of the biggest U.S. initial public offerings for a software company. Sales had more than doubled year-over-year for six straight quarters through the end of last year, raising expectations and pushing shares to a record $401.89 in mid-November. The stock tumbled 61% this year as part of a broad decline in software company valuations and after Snowflake in March projected revenue would slow below its triple-digit pace.

“Today, some customers face a more challenging operating environment -- specific customers consuming less than we anticipated amid shifting economic circumstances we believe are unique to their businesses,” Chief Financial Officer Michael Scarpelli said during a conference call after the results.

Scarpelli said the “macro headwinds we’re hearing” made executives more cautious with their forecast, but didn’t diminish the company’s opportunity for long-term growth.

Snowflake earns revenue when customers store data and run queries on its platform, which is different from other software vendors that charge a monthly subscription cost. Asked on the call about whether this consumption model posed risks when enterprises cut back on spending, Scarpelli said the company is committed to the model and isn’t considering going to subscription-based contracts.

In the fiscal first quarter, product revenue increased 84% to $394 million. Snowflake said it had 6,322 customers at the end of the period April 30, just missing analysts’ average estimate, and a 6% increase from the previous quarter.

Revenue retention -- a metric of sales growth among current customers -- is of particular interest to the market, since Snowflake has managed to keep the figure higher than most peers, said Morningstar analyst Julie Bhusal Sharma. “Usually, you’ll see that start to trend downward as new companies get a little older and a more mature base.”

If tech valuations remain depressed, Snowflake may look for smaller acquisitions to expand technical capacity, Scarpelli said. Bloomberg Intelligence analyst Mandeep Singh wrote in a research note ahead of earnings that the company could use deals to expand into adjacent segments such as data visualization.

Snowflake’s net revenue retention rate was 174% in the quarter, compared with analysts’ average estimate of 161%.

The shares declined about 13% in extended trading price after closing at $132.77 in New York.

(Updates with additional CFO comments in the sixth paragraph.)