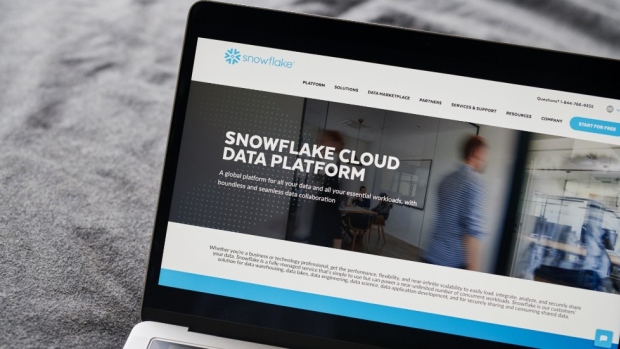 The Snowflake Inc. website homepage is displayed on a laptop computer in an arranged photograph taken in the Brooklyn borough of New York, U.S., on Wednesday, Sept. 16, 2020. Snowflake Inc. soared in a euphoric stock-market debut that transformed the eight-year-old software company into business valued at about US$72 billion. , Bloomberg/Gabby Jones

Iconiq Capital, a multifamily office whose clients include Facebook Inc.’s Mark Zuckerberg, LinkedIn Corp.’s Reid Hoffman and Twitter Inc.’s Jack Dorsey, took part in multiple Snowflake funding rounds beginning in 2017. Its 12 per cent stake in the company, purchased for US$245 million, was worth more than US$4 billion at the initial offering price of US$120. By the end of Wednesday, the same stake was worth a staggering US$8.6 billion.

Shares of the cloud-computing company surged as high as US$319 in New York trading before dropping back to close at US$253.93. That made it worth US$70 billion, about as much as Goldman Sachs Group Inc. and almost six times the US$12.4 billion it was valued at in a February fundraising round.

Only one of them, Dageville, was a founder. His stake is smaller than Slootman’s, who joined as chief executive officer from ServiceNow Inc. last year.

Concurrent with the IPO, former CEO Muglia sold half of his 8.1 million Snowflake shares to Berkshire Hathaway Inc., which is also investing an additional US$250 million at the IPO price. Such deals aren’t typically part of Warren Buffett’s play book, although in 2018 Berkshire invested in the initial offering of Brazilian fintech StoneCo Ltd.

So far it has been a winning bet for Buffett, with the value of Berkshire’s investment more than doubling by the end of the day.